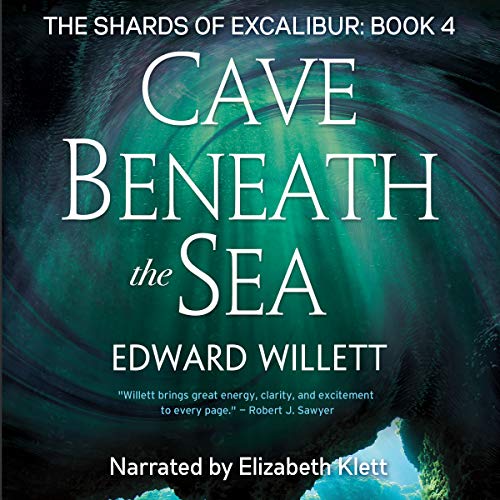 The Cave Beneath the Sea

By: Edward Willett
Narrated by: Elizabeth Klett
Try for $0.00

The fourth shard of Excalibur might come with a price Ariane doesn’t want to pay: her mother.

Seeking to recover the shards of King Arthur’s sword Excalibur before Rex Major (the ancient sorcerer Merlin in a modern-day guise), Ariane and Wally have traveled around the world, and their quest is not yet over. Ariane’s magical powers as heir to the Lady of the Lake, combined with Wally’s clever thinking, have enabled them to hang on to two of the three shards they’ve located so far - but Rex Major still has one shard of his own and will stop at nothing to claim all the pieces for himself and use its power to rule Earth and invade the magical realm of Faerie.

And now Major has his eyes on a big prize: Ariane’s mother, who went missing after she refused the power of the Lady of the Lake.

Thanks to Wally, Ariane knows her mother is alive - and that Rex Major is trying to find her. If he succeeds, Ariane fears she’ll have no choice but to surrender the two shards she and Wally possess, because she’ll do anything - and give up everything - to have her mother back with her again.

Ariane and Wally race to the Caribbean as they try to find Ariane’s mother and the fourth shard of Excalibur before Major does. As they struggle to stop Major, Ariane and Wally face desperate danger...and must make the most difficult decisions of their lives.

“Edward Willett has created as exciting a read as the earlier books in the series, continuing to develop his characters and their relationships while the action-filled plot carries the reader to intriguing national and international locales.... It’s hard for me to decide which is the stronger foundation for the story, the characters or the plot, as both are substantial and intricate.” (CanLit for Little Canadians)

"Cave Beneath the Sea will appeal to young readers in search of adventure as well as adults who enjoy another version of the timeless story of King Arthur.... Recommended.” (CM Magazine)

What listeners say about The Cave Beneath the Sea

This is the fourth book of this series I’ve read/listened to, and I look forward to listening to the remainder of this series.
Ariana and Wally are strongest when they work together, and it is good that they are, since Rex Major (Merlin) now has the assistance of Wally’s sister, and she might be even more keen to see Ariana fail.
Wally confirms Ariana’s mother is alive and they need to find her before Merlin can use her against Ariana.
To make things even more difficult, the next shard is under salt water and Ariane cannot manipulate it. However, she is learning even more about her powers and what she is truly capable of.

This is the fourteenth book I’ve listened to by this narrator ( Elizabeth Klett ) and she amongst the best, in my opinion. She has a wide array of character voices that are all realistic, and she imparts the characters personality into their voice. Her narration always draws me into the book.

This is a great adventure book for pre-teens and up. The conflict between characters is tame. There are no explicit sex scenes, excessive violence or swearing.

The Quest Continues... See what else is brewing!

Cave Beneath the Sea is the 4th book in the Shards of Excalibur series. Merlin lives among us in the guise of Rex Major (can you say hubris?) a billionaire computer magnate. Although he only possesses a mere fragment of his former magic, it is enough to weave it through the World Wide Web to manipulate people and propositions. As it is with power, he wants more. His sister, The Lady of the Lake forged Excalibur more than a millennium ago. After Arthur’s demise she broke into shards and hid them all over Earth, away from Faerie. Knowing Merlin is trying to locate them to get his full magic back so that he can rule Earth and Faerie, The Lady had to summon one of her descendants and offer her the magic of The Lady. Excalibur will want to be in tact and in the possession of the Lady to feel sentient once more. Enter Arianne.

It makes sense that in this instalment, they are searching for the 4th, and last, shard. All that remains is the hilt. However, Merlin has one (or more) of the shards as does Arianne. To find out who has which shard(s), you will need to continue with this exciting story. The quest takes them all over the world. I find it intriguing that their home base is Canada. Rex in Toronto, but Arianne and her friends and family in Saskatchewan! It is an amazing journey, a race to see who will get to possess Excalibur. Join in to find out who is winning. I am excited to find out how it ends. Will magic remain on Earth or will it all return to Faerie? Will Merlin remain as a Sorceror or will he turn mortal? Will he end up in Faerie or remain in our realm? So much of the story remains.

Elizabeth Klett does a fantastic job of narrating the Shards of Excalibur series. Her voices are terrific. They are varied and each character is easily recognizable by their voice. Merlin’s upper crust British accent is “spot on”. I was given this book, at my request, in exchange for an honest review.

It's not a very thrilling start to another quest, but I had to laugh ... Lady of the Lake in freaking Saskatchewan - where lakes are frozen solid for six months out of the year. The frozen water is just one of the things which frustrate Ariane and Wally (and the reader!) as they try to find the next piece of the sword. Despite the low-key start, the adventure and the tension ratchet up very quickly. The two teens have a much rougher go of it this time around because they have an additional worry besides getting to the next shard of Excalibur - finding Ariane's mother and keeping her out of Rex Major's clutches.

What I really liked about the story this time was the character growth of both Ariane and Wally. Ariane's ability to recognize when the shards were driving her emotions grew, giving her more control over her actions - something that made a huge difference to all of the difficult choices she was forced to make. At the same time, Wally's experiences with the sword's constant pressure to eliminate all obstacles gave him a much greater understanding of what his friend has been going through, and that made for a much more supportive relationship between the two of them. That was in complete contrast with the interactions between Rex Major and Wally's sister, Felicia, as they raced to beat Wally and Ariane to the next shard. Mr. Willett did a very good job of keeping that relationship from seeming creepy while making them very nasty and effective foes for our teen heroes.

It was again a real pleasure to listen to the story. A couple of new characters were added to the mix this time, yet Elizabeth Klett's stellar narration never faltered. I saw in another review that she has narrated other stories, and I intend to search them out. Hopefully the stories are as good as this series is.

I'm very much looking forward to the conclusion of this quest in the next book. I expect it will be just as enjoyable as this part of the adventure was.

great continuation of the story

This series has continued to be very entertaining and fun to listen to. The narration is still quite good. Although they are geared towards a younger audience, it has been very entertaining for me too. If you like an interesting take on Arthurian Legend, this series is a good choice.