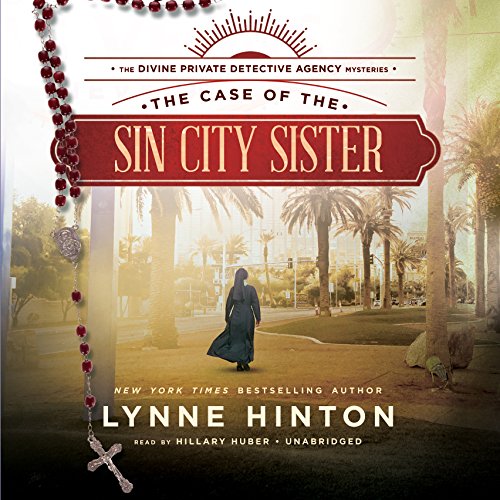 The Case of the Sin City Sister

When Eve's biological sister goes missing, the nun heads to Las Vegas to track her down before it's too late.

Years ago Eve heard God's call to become a nun, but her recent stint moonlighting at her father's detective agency has her wrestling with her vocation. She's working with him on a case involving a miner in New Mexico when alarming news develops: Her sister, Dorisanne, is missing. The authorities won't act without evidence of a crime, but Eve knows something suspicious - and possibly deadly - is afoot. Challenged to put her newly found gift as a private investigator to the test, Sister Eve heads to Las Vegas to uncover clues about her sister's whereabouts.

What nefarious scheme has Dorisanne become involved in? Is her life in danger? And what is Dorisanne's estranged husband hiding? Sister Eve will discover that there's always more going on in Sin City than meets the eye.

What listeners say about The Case of the Sin City Sister

Well everything I liked about book one in this series was lost in this second book. The strong sense of place and detailed descriptions of New Mexico and the desert were missing. The dialogue was wooden and remained in the realm of "he said" and then "she said" style. Instead of allowing the story to develop through character driven action we are "talked at" not shown--which becomes distancing and boring. The narration was terribly slow--when I turned up the speed to 1.5 or even 1.25 it became robotic.

However, the most disturbing problem I had with the book were the technical errors. Some of these errors were minor and others not so minor. For example, polygamy is having multiple wives at once and something usually knowingly entered into by the family. Where as bigamy is marrying someone else when you are already married. This usually falls into the realm of two separate families that don't know about one another. To me, these terms are not interchangeable and mean two very different things. They were used in the story inaccurately. Next, I know a great deal about how hospitals function and the parts of the story involving the hospital are completely off the mark. It rendered all the hospital scenarios ridiculous and even laughable. Finally, I found several plot/story line inconsistencies that were irritating. To me, fine detail, research and accuracy matter in a mystery--it is what makes or breaks the story and the success of the book.

One last thought--book one had a very limited religious discussion and feeling even though the main character is a fully professed Roman Catholic nun. Just be aware that book two changes this and introduces frequent discussion of religious concepts, prayer and the rosary. This change may make some readers feel uncomfortable. I was fine with this but it is a personal choice.

In the end I was disappointed by this second book in the series and won't continue if a third book appears. Can't recommend.

The cover is deceiving

Not a procedural. Not a romance. No denominational proselytizing. No gore or erotica.
Welcome to a cozy mystery that is not sappy. There are several mysteries: the disappearance of a miner at the end of the 19th century, a suspicious disappearance of the protagonist's sister in present time, and the resolution of a crisis of vocation within the protagonist. Stir in an ex cop PI (the father of the women), the feds, the inveterate Harley rider, Vegas bad guys, and the client who brought in the 100+ year old family cold case. The two time periods are skillfully woven together and make for an engaging read with a bit of a philosophy lesson added in. I enjoyed it enough to read it in one day (got half a sock done!).
Yes, it's the audio format, and, in my opinion, the narrator gives a fine performance if you use a device which allows you to listen at 1.5x speed. Otherwise one might get a bad case of the wiggles.

I've listened to both books by L. Hinton and would recommend both. Easy listen and interesting.