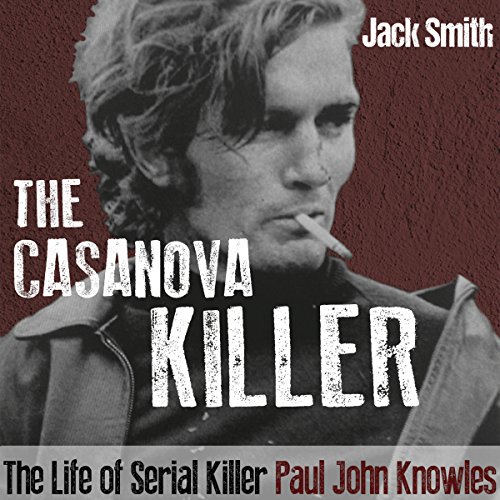 Paul John Knowles, nicknamed the Casanova Killer, went on a four-month killing spree in 1974. He still remains one of the lesser known serial killers of his generation. Learn all about this psychopath who wanted fame before his life ended.

As she entered her home in Milledgeville, Georgia, all Ellen Carr probably had on her mind was going to bed. She was a registered nurse who worked a night shift, and although her small family welcomed the money, the job was a demanding one.

Inside, the house was unnaturally quiet. She found that odd. Her husband, 45-year-old businessman Carswell Carr, and 15-year-old daughter, Amanda, usually greeted her when she came home from the hospital.

That wasn't the only sign that something was seriously amiss. As an investigator later put it, "The [place] looked as if it had been attacked by an animal." Mirrors were smashed. Slashed furniture lay everywhere, some of it in pieces. Books from the bookshelves littered the floor.

Had they been robbed? Where were Carswell and Mandy? Heart pounding, Mrs. Carr ran from room to room, calling out. Minutes later, she was back outside, screaming hysterically. Neighbors called the police to what was obviously the scene of gruesome double homicide.

Carswell Carr's nude corpse was lying face down on the couple's bed, hands bound behind his back and 27 stab wounds, inflicted by scissors, all over his body. The medical examiner later determined that he had died of a heart attack, likely brought on by the torture. Down the hall, Amanda was also face down in her room, one nylon stocking tied tightly around her neck and another shoved down her throat. To compound the horror, she appeared to have been raped after death.

What listeners say about The Casanova Killer


This guy SURE was an opportunist! Wow. I really couldn't help but laugh at his boldness in helping himself to whatever ordinary essentials he needed from his victims (besides money, credit cards)...like their car, clothes, jewelry, shaving kits, etc...because MOMENTS after the crime, he'd be sporting (and using/wearing) those things as if they were HIS, and "on the make" with the women at a local nearby bar! Hahahaaaa! How nuts is THAT? And being considered somewhat good looking, he had no trouble snaring them! Needless to say, he wasn't looking for a long term relationship...Lol.

I hadn't heard of this killer before, so this was fresh meat for me. I couldn't believe how nonchalant he was murder after murder after murder, as if it were no big deal and ho hum just another day of the week. Although this story was rather short in length, it was jam packed with all the crimes he committed - and there were LOTS. What a busy guy! Not kidding. Every few sentences it seemed like someone else was being killed. Yea, that many. I was quite surprised.

I often get these "little tidbit" versions when they are offered as a free kindle book - and check off the "add audible narration for $1.99" option. It's a great way to fill in that occasional credit gap at the end of the month ;-) This one was worth the few bux for sure. Glad I snagged it! I know I will be listening to it again. I also enjoyed this narrator a lot too.

My Review
At around 1/12 hours in length this is obviously not an in-depth study of these horrendous murders, nor does it delve deeply into the possible causes of psychopathy. What is though is an almost detached rendering of the basic facts. Facts which are quite shocking to read or to listen to. I'm surprised that I had no prior knowledge of this killer who, despite his terrible acts of violence, somehow escaped the notoriety of other serial killers.
I mostly read crime fiction and, whilst listening to this I realised I had to change my listening mode, I had to stop allowing this information to merely flow through my head, bypassing the deeper thought processes, it dawned on me: this stuff is real! A human being actually did this to another human being! Once this thought sinks in, well, that's when it becomes a little harrowing, especially so when this man, this fellow member of the human race, committed these crimes for his own pleasure. Best not to attempt to understand why.
I like the way this book is written, it gives us the bare facts, dig deeper if you will.
Narrator
Narrated by John N. Gully, and what a darned good job he made of it too. He has a pleasant, easy to listen to and clear voice and related this account of the crimes of Paul John Knowles in exactly the right manner.
It would have been easy to spoil the narration by using a news reporter or advertising voiceover style, I'm so pleased he avoided this through his use of a professional and dignified approach

Paul John Knowles aka the Casanova Killer was an interesting look at a sick-minded individual during the 1970's. The fact that on multiple occasions he'd said that he wanted to be famous and known as the Casanova is perhaps why he was lesser known than someone like Bundy. Who knows.

I think this was an okay book with excellent narration. I would have found the content way more interesting had there been some in depth research into his background such as his childhood, parents, education, etc. It felt generic. I'd rather learn what makes someone like this tick than to just hear a list of his actions.

As for the narration, John N. Gully did a great job. He has a wonderful voice and speaks clearly. I think the way he read this book was in a journalistic style that worked well. He was spot on and strengthened this book.

Only a quick overview

Early in the book the author remarks that Knowles "is a footnote in the history of American serial killers. Until now. This book examines the life of Paul John Knowles in detail."

This struck me for two reasons:

1) At 80 minutes long "in detail" is hardly a word I would use to describe the book. It is a great overview, telling the core details of Knowles but it is hardly a detailed look at his life

2) As repeated several times in the book Knowles was wanting to get famous. He wanted to be a well known serial killer, not a footnote. So is the author actually helping to fulfill Knowles desires here?

Smith cover's Knowles life briefly, giving information on his early arrests, his kills and his short relationship with Sandy Fawkes. None of these are in great depth. It also discusses his beliefs and state of mind, based on the recordings and notes he left with his lawyer. Again, then the not in great detail.

This book provides a good entry level overview of Knowles and what he did. If you are looking for a really in depth look, with details on each individual murder and suspected murder (there are almost as many murders they suspect were his as there are confirmed ones) and a solid look into his psyche, then you should probably look elsewhere.

John N Gully does well with the narration, although there isn't that much to work with here (as is the case with a lot of non-fiction). I've listened to other stuff he has done and he does solid work. Easy to listen to and enjoyable, he is clear and well paced.

This book is very excellent. We learn about a serial killer who some how didn't get a popular as Ted Bundy, Gacy or Dahmer. But his deeds wasn't less evil

Ignore the negative reviews. Yes, it is understandably brief given the paucity of available information about Knowles. But despite this handicap the author still manages to spin a gripping and fast paced narrative, while consistently maintaining an objective tone that draws from well documented sources. Well done Dr Smith.

What made the experience of listening to The Casanova Killer the most enjoyable?

The story was short and to the point. The facts were laid out and interjected with statements from those involved.

What does John N. Gully bring to the story that you wouldn’t experience if you just read the book?

I liked the narration because the narrator read the book instead of acting it out. I thought he did a good job.

Good story, well put together and researched. I liked that it was less than two hours and the author didn't try to fill up the time with a bunch of useless information. Please hit the Like button below if this review helped you.

If you could sum up The Casanova Killer in three words, what would they be?

This is a crazy story, it proves that real life is stranger than fiction

When they finally made the world a little bit safer.

I was provided this audiobook at no charge by the author, publisher and/or narrator in exchange for a fair and unbiased review.