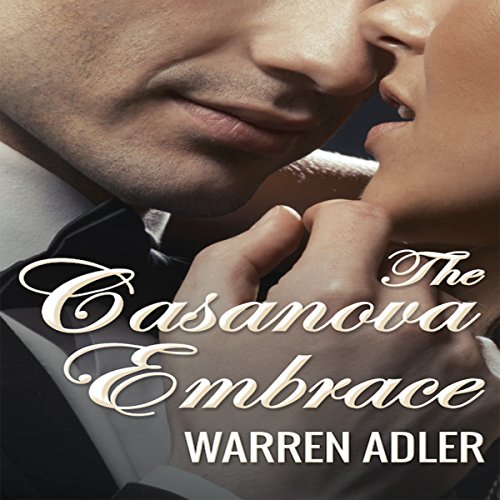 By: Warren Adler
Narrated by: Lynn Norris
Free with a 30-day trial

From the carcass of a Washington, D.C. car bomb explosion, the CIA launches an investigation into the mysterious events leading to the assassination of Chilean dissident and infamous casanova, Eduardo Allesandro Palmero.

As CIA investigator Alfred Dobbs rummages through the evidence, Palmero's mysterious life, from heir to the Chilean oligarchy to a fist-raising Marxist and trickster in disguise, comes to light. But what Dobbs soon discovers soars beyond his wildest imagination. At the height of international terrorism, Eduardo fights his war with an unlikely weapon - seduction.

From Marie DeFarge to Frederika Millspaugh to Penny Anne McCarthy, Eduardo orders his sex-craving subjects into battle, tearing them from a life of tranquility and into the passionate caress of a man who will stop at nothing for a cause, his cause.

Soon enough, Marie, Frederika and Anne are making headline news as part of a South American terror squad. But when Eduardo's carpet of lies begins to unravel, thread by thread, and his obsession-inducing sexual offensive comes to a slow and subtle halt, his very fate is at stake. Will the feared Chilean Intelligence Agency finally get him? Will lust intoxicate the minds of three women descending beyond reason? Or will the conned women become the conwomen?

What listeners say about The Casanova Embrace

Mystery,suspense,history mixed with a lot of sex

This is an interesting story that does not reach its full potential. It cheapens itself by having more sex then is necessary to keep the readers interest.The plot was predictable and could have been more fully developed. The Narrator did a good job with the material but the Audio quality was poor. This book was given to me for free at my request and I provided this voluntary review.

It’s a Casanova to your ears

This is my first from the author. There is a storyline of desire , hunger of the human desire , letting your self go . The first I hear from the narrator. The voice was clear and you can tell the characters from the voice This story is about three women that lets their desire speak for themselves. The three women get involved with a South American and everything is let loose.

If you are looking for a romance novel that reads like a soap opera, this is your book. I found it tough to follow because everybody winds up in bed with each other within 10 minutes of being introduced to their characters. Not a bunch of substance but lots of very descriptive sex. Lynn Norris’s narration was fantastic and her excellent accents and character differentiation were superb. It’s worth listening to for her.

Not One of Adler's Bests

The blurb for this story caught my interests but unfortunately my interests were let down. I have enjoyed several of Mr. Adler's other works but this one fell flat for me. Yes, it has intrigue, romance and a basis set in history but the story becomes predictable in it's latter chapters. The major plus to this story is the narrator. I absolutely loved Lynn Norris' narration!! She did an excellent job with the characters, including wonderful accents! I was able to listen to this story fully mainly due to her! She'll be added to my list of narrators to look for. I was given this free review copy audio book at my request and have voluntarily left this review.

I was given this free review copy audio book at my request and have voluntarily left this review. This was my first encounter with this author and narrator. The narrator was fantastic. That being said, I was a bit disappointed with this book. It started really strong and seemed to be building to some great espianage action. The action turns out to be mostly sex. I expected there to be some sex scenes, and those are not really an issue for me, but they didn't really seem to drive the plot for me. They seemed gratuitous and in some ways unnecessary. Speaking of plot, there really turned out not to be much of one. The narrator was really what kept me interested in the book. That is my opinion, though, so feel free to be your own judge.

The book started out great and then fizzled shortly after. I found the main character to be despicable. He seemed to try to destroy those who cared for him. The author wrote some vivid descriptions in the book. The narrator did an awesome performance with the various characters. I requested this review copy audiobook and have voluntarily written this review.

not the clearest story

the story isn't the clearest it wasn't bad as a book as storyline but it wasn't the best either I had a lot of issues with keeping on with the book but it was interesting it could have been better but it wasn't that bad the narrator kind of saved the book though I am telling that's the book isn't bad I think that's the narrator did give me through the end of the book I was given this free review copy audiobook at my request and have voluntarily left this review.

Starts with a bang and fizzles from there . . .

I have listened to a few other books by this author which I really enjoyed and looked forward to this title as the description seemed of a work right up my alley. Although this story started off with a lot of potential given the premise of international espionage and a set of interesting characters it lost its steam about halfway through. Unfortunately, and true to its title, the work turned into a repetitive series of Casanovaesque trysts. There were a lot of graphic sex scenes, but I have to say they were rather tastefully done and not out of context with the story-line. The problem I had is, aside from interspersed backstories of the main character's upbringing, with some sprinkled in Caracas history, there wasn't much intrigue. As I stated, not only did the basic scenarios seem to get repetitive, but how the story was going to end became very obvious . . . all the intrigue went out the window. I will say that the narration by Lynn Norris was superb as she not only handled the male and female voices well, but the differing foreign accents added to the story and is really what kept me listening. I was an enjoyable listen, but the story it self left me disappointed. It was fitting to have a female narrator, but I had to keep reminding myself that a male wrote this story because it certainly seems the type of listen that would probably play better to a female audience. I'd recommend this to someone looking for more of a romance-type novel than one of intrigue, though both genres are present. A review copy of this audiobook was provided by the author, narrator, or publisher at no cost in return for this unbiased review. If you found this review helpful, please take a moment to click yes below.

Although this story is well written and suspenseful, I can't see any point to it. The characters are well developed and performed excellently by Lynn Norris, but it's a real stretch to believe these women would behave this way. The pace is slow and jumps around in time and perspective, making it a bit difficult to follow at times. At least the story comes to a satisfying conclusion. NOTE: I was given this free review copy audiobook at my request and have voluntarily left this review.

This book has murder,intrigue ,romance and suspense.I enjoyed it. The narrator did a great job distinguishing between the characters. I don’t know about you but I like to know which character is speaking . Lynn Norris does a good job of making you feel each persons emotions. I would recommend this book.