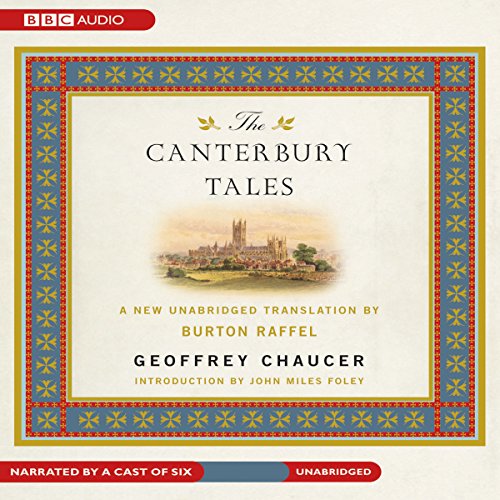 By: Geoffrey Chaucer
Narrated by: uncredited
Try for $0.00

Lively, absorbing, often outrageously funny, Chaucer's The Canterbury Tales is a work of genius, an undisputed classic that has held a special appeal for each generation of readers. The Tales gathers 29 of literature's most enduring (and endearing) characters in a vivid group portrait that captures the full spectrum of medieval society, from the exalted Knight to the humble Plowman. This unabridged work is based on the new translation.
©2008 Burton Raffel. All rights reserved. (P)2008 BBC Audiobooks America
Classics
Show more Show less

What listeners say about The Canterbury Tales

This is a wonderful reading of Chaucer's tales. The different narrators really bring each of the stories to life. I have read this book (or sections) numerous times and I have to say that this translation was by far the most easy to understand and the most engaging. I really recommend this version of Chaucer's tales. The only problem I had with it has been mentioned by others (Audible, take note) the chapters are not designated by book, but by presumably Audible's convenience, that means, you cannot skip around to different tales, you have to listen to it front to back. This was irritating, and is the only reason I give it less than 5 stars.

Burton Raffel is the crown prince of Old and Middle English translators in my book, and his Chaucer is another masterpiece. The rhyming is more subtle than in other translations of Chaucer, but it's there; and the tales unfold with seemingly effortless clarity. This is a high-quality, multiple-reader production, and it includes all the tales (including the Tale of Melibee and the Parson's Tale). The only thing marring the production are the chapter breaks: they are geared to the CDs rather than the individual tales. If you're planning to listen straight through, that's not a problem, but I would have preferred the ability to be more selective.

It's amazing that in only a few months, Audible has gone from a skimpy selection of Chaucer to three outstanding recordings of the complete set of Tales: one from Charlton Griffin, one from Blackstone, and this one from the BBC. Any one of them provides a wonderful listening experience. This one is my favorite because of Raffel; others may suit your taste better. But for heaven's sake get ONE of them.

Listening to the Canterbury Tales as an audio book is probably the best way to fully appreciate them, as they were certainly conceived to be listened to and not read silently for oneself. The narrators are varied and talented; they certainly succeed in bringing out the most from each tale. Also, the excellent translation makes the work perfectly accessible and easy to understand.


This unabridged version makes one realize however that this work was never finished or has been incompletely transmitted to us. For instance, the first tales such as the miller's and the reeve's are cleverly linked to one another. Sadly, soon enough afterwards, no structure is perceptible and tales simply follow one another with no apparent logic.


In addition, the unabridged version includes lesser known tales, some of which are dismally boring, such as the Tale of Melibee or the Parson's Tale, both in prose. They are closer to a long series of quotations than an actual narrative. Was Chaucer being ironic in including them? Or else, are they later additions that Chaucer did not write himself?

Overall, listening to the Canterbury Tales is a unique experience that is highly recommended to all, for sheer delight but also to realize how much, and how little, our culture has evolved since medieval times.

I have attempted to read the Canterbury Tales many times in the last half century. After all, it's been a classic almost from the time of its writing but I do not believe this great work has ever been made so accessible as it has been here. The beauty of the translation is brought even more to life by the wonderful narrations. This is the best Chaucer that I have ever come across.

I doubt that many people will share my disappointment that this audio version isn’t in well-performed Middle English. But for those few of you, be aware that this is translated throughout. There is no “Whan that Aprill with his shoures soote The droghte of March hath perced to the roote, And bathed every veyne in swich licour Of which vertu engendred is the flour;...”

It's The Canterbury Tales, so I feel really ridiculous reviewing it as a story. It's fantastic, of course. The narration is very good. More than one actor plays different pilgrims, which is a plus. I listened to this as a refresher before teaching the stories. My only problem with it is that I wasn't always pleased with the translator's choices, which is why I gave it four stars overall. Completely pedantic, I know.

sometimes it was a struggle to get through it since many tales aren't famous for a reason (downright boring) but the makers of this audio book did do the best they could. I would recommend this to a student who has to study the whole of the Canterbury Tales but needs it in plain understandable language. one thing that bothered me was that the author didn't manage to keep the rhyme scheme.

Was expecting knights and chivalry, got fart jokes and cheating wives instead.

This was not at all what I had expected. I know that it is a classic so it’s nice to have it under my belt, but it was just tales of voluptuous women, infidelity, and ending with a brief systematic theology on the Roman Catholic religion. The narration was good though.

A very listenable translation of the Old English

This translation doesn’t mince words. In the author’s (B Raffel) prolog, the effort was put into expressing the meaning over maintaining the rhyme. At the same time, it also maintains some of the remnant rhyme when it could, giving some feeling of the style of the original work, without making it obscure. The modernized English made it possible to capture the crudeness of some of the tale tellers and makes the work far more accessible to modern readers who are not versed in Old English. Hence, the voices of the various actors playing the parts of the various pilgrims seemed more natural and believable. Of course, even with such good acting, the subject themes of The Canterbury Tales are from a former time. I can imagine many people complaining about some of the characters and, obviously, there is plenty of discussion about religion, so it is probably not a book for people who cannot accept that Chaucer lived in a very different time and world than we do. However, considering a 14th century filter, I think Chaucer seriously discusses the matter in these tales in an intellectually honest way. Nevertheless, the treatment of women and (in one story in particular) Jews is understandably likely to offend some people. I can only plead some grace for very long dead people who weren’t raised in "wokeness". Yet even this is an advantage with an audio book. The really good tales can be reviewed again, and the more questionable ones can be heard once and never considered again without having to exert the effort of reading those parts and finding the motivation to keep on reading on. Certainly, through the timeless voice of the 14th century, The Chanouns Yemannes Tale speaks to chasing after to-good-to-be-true schemes to make a buck. The Tale of Melibeus taught me about what we seem to lack most in the modern world; prudence. The pardoner’s tale is a classic I remember from the first time I read this book. The main thing I really don't like about this audiobook was that the chapters are essentially arbitrary, containing neither a heading for what tale is being told nor even a subdivision into the different tales. Chapters close and open in the middle of several tales. In a short book, that might not matter, but in such a long book, it makes going back to find a particular tale quite difficult.

A good book for history buffs with many historical references. Some of the tales are hysterical, others a little boring, the last one particularly so.