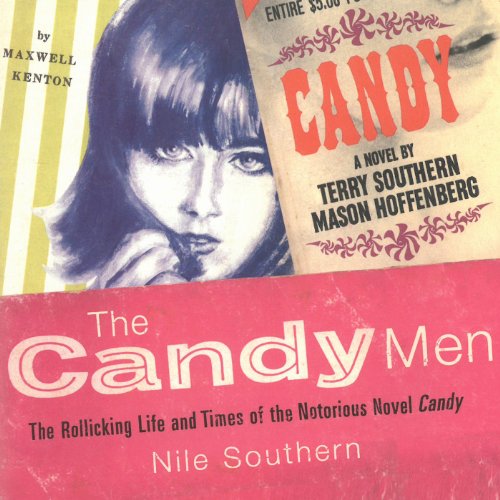 By: Nile Southern
Narrated by: Richard Topol
Try for $0.00

In the spirit of VH1’s Behind the Music comes this revealing behind-the-scenes look at the making, breaking, remaking, pirating, filming and legal wrangling of the ‘60s cult phenomenon Candy. An erotic satire vaguely inspired by Voltaire’s Candide and penned under the name Maxwell Kenton (the nom de plume of its ex-pat coauthors, Terry Southern and Mason Hoffenberg), Candy was first published in 1958 by the notorious French publisher Maurice Giordias. The book was immediately banned, then reissued under the title Lollipop, banned again, then reissued again, sanitized in England and eventually shipped stateside, where thanks to Putnam and a slew of publishing pirates, it leapt to bestsellerdom and was eventually crowned "the world’s most talked about book."

Southern’s own son, Nile, has recounted the novel’s bumpy and adventurous journey in a magnificent epistolary style, reprinting the correspondence between Candy’s authors, its publisher and its increasingly complicated web of involved parties. The compilation perfectly captures the "growing misunderstandings, temper tantrums, paranoid fixations, jealousies, dreams and utter despair that each of these men went through as they tried to regain control over their book lost in a miasma of cloudy copyright." (Miasma is an apt term: by the second half of the book the legal fog is so thick that it’s nearly impossible to keep track of who’s suing whom.)

Raucous and voyeuristic, this biography of a book offers valuable insight into the Beat scenes of Paris and New York, as well as into the publishing world during an era of shifting attitudes toward censorship. Perhaps most importantly, it also offers a window onto the lives and minds of two wildly creative literary characters: the authors Southern and Hoffenberg themselves.

What listeners say about The Candy Men