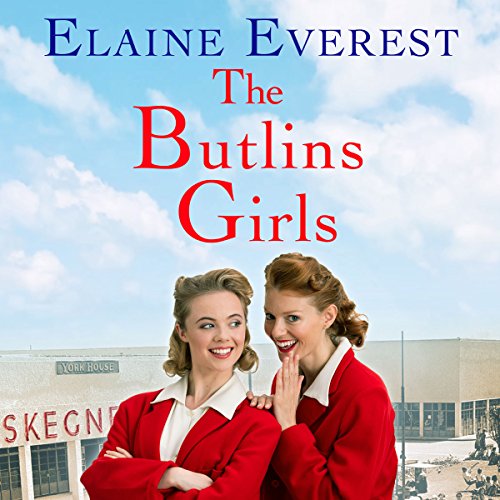 By: Elaine Everest
Narrated by: Annie Aldington
Try for $0.00

A comforting story set against the nation's favourite holiday camp, from the best-selling author of The Woolworths Girls

"Molly Missons gazed around in awe. So this was Butlin's. Whitewashed buildings, bordered by rhododendrons, gave a cheerful feeling to a world still recovering from six years of war. The Skegness holiday camp covered a vast area, much larger than Molly expected to see."

Molly Missons hasn't had the best of times recently. Having lost her parents, now some dubious long-lost family have darkened her door - attempting to steal her home and livelihood....

After a horrendous ordeal, Molly applies for a job as a Butlin's Aunty. When she receives news that she has got the job, she immediately leaves her small hometown - in search of a new life in Skegness. Molly finds true friendship in Freda, Bunty and Plum. But the biggest shock is discovering that star of the silver screen, Johnny Johnson, is working at Butlin's as head of the entertainment team. Johnny takes an instant liking to Molly, and she begins to shed the shackles of her recent traumas. Will Johnny be just the distraction Molly needs - or is he too good be to be true?

What listeners say about The Butlins Girls

Narration was great , but the storyline , leaves a lot to be desired . Not worth the time or money

How refreshing to find a book that isn't a psychological thriller! When I started listening to this, I wasn't sure it was going to be my cup of tea, but within minutes I was hooked. When I say that Elaine Everest is like Enid Blyton for adults then I mean this is a really good way!

The story wrapped itself around me like a comfort blanket and had me walking around and smiling to myself. I was disappointed when it ended but pleased to learn that there are other Elaine Everest books I can listen to.

Not to be missed

I have yet to be disappointed by anything by Elaine Everest and think Annie Aldington is certainly one of my favourite narrators.
You really do find yourself immersed in the lives of the girls and can imagine being at Butlins.
I can't wait for Elaine's next book.

I first started reading Elaine Everest's books when I picked up a copy of the Woolworths girls on a recommendation. I really enjoyed that so I thought I'd get the Butlins Girls on audible. I loved how Frida's character from the Woolworths girls linked into this one. I liked the connection between the two different series. (you could still understand the story without reading her other books but I thought it was a nice touch). The story was good and I especially liked how it interwove the stories of Plum and Bunty, the friends Mollie makes at Butlins. I have now also picked up a copy of the Teashop Girls which I'm very excited to start.

The narrators voice was good, easy to listen to and good variation on the characters voices.

Brilliant story, very well read, didn't want it to end, very easy to visualise characters due to the excellent reading

It was lovely to hear the Woolworths girls included in the story and as usual lots of facts about the subject Butlins. Loved the story but was disappointed with the abrupt ending.

Having very much enjoyed Elaine Everests Woolworth series I was keen to listen to the Butlins Girls, however, sadly I found this book to be completely predictable. The story was quite sickly sweet and had little real substance, the main romance being so improbable that it became quite irritating times. I wouldn't recommend this book but I will definately try some others by the author in the hope that this was just a bad one.

What an amazing book

This book is so amazing and addictive. I really enjoyed listening to it. There should be more books done on Holiday Camps as people do love them so much.

very well written and well narrated , listened to this book in one day! will certsibk5 buy more from this author.

What a fantastic series of books. The story was just fantastic and it got me hooked from the start. Ups and downs of each characters. I've cried with Happy and sorrow tears.
I recommend that all the people at any age to read or listen too this whole series. Well to the author for writing this story and others. I give it 10 /10 in marks! 😁 👍🏻👍🏻👍🏻👍🏻👍🏻👍🏻👍🏻👍🏻👍🏻