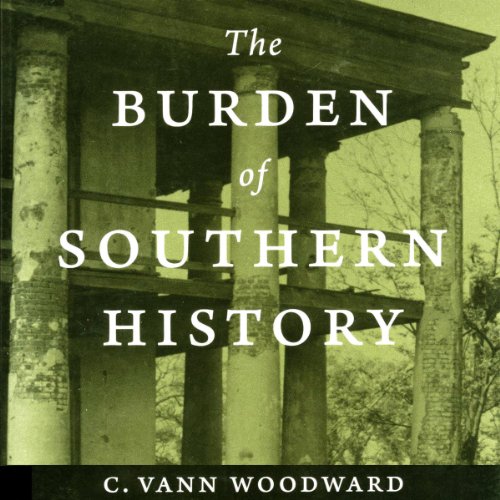 The Burden of Southern History

C. Vann Woodward's The Burden of Southern History remains one of the essential history texts of our time. In it Woodward brilliantly addresses the interrelated themes of southern identity, southern distinctiveness, and the strains of irony that characterize much of the South's historical experience. First published in 1960, the audiobook quickly became a touchstone for generations of students. This updated third edition contains a chapter, "Look Away, Look Away", in which Woodward finds a plethora of additional ironies in the South's experience. It also includes previously uncollected appreciations of Robert Penn Warren, to whom the book was originally dedicated, and William Faulkner. This edition also features a new foreword by historian William E. Leuchtenburg in which he recounts the events that led up to Woodward's writing The Burden of Southern History, and reflects on the book's - and Woodward's - place in the study of southern history. The Burden of Southern History is quintessential Woodward - wise, witty, ruminative, daring, and as alive in the twenty-first century as when it was written.

What listeners say about The Burden of Southern History

peculiar evil was not a "positive good"

This book was published in 1960, the beginning of a decade haunted by arguably the most heinous and evil acts committed in the name of hatred and ignorance.

Dr. Woodward chronicles the hate and ignorance as it mushroomed in the South and the tragic ironies. He vehemently argued that Southerners (particularly the hypocritical "intellectual" South) must face the experiences of evil and tragedy that are part of the Southern heritage.

"... the Southern heritage is distinctive. For Southern history, unlike American, includes large components of frustration, failure and defeat. It includes not only an overwhelming military defeat but long decades of defeat in the provinces of economic, social and political life."

"Much of the South's intellectual energy went into a desperate effort to convince the world that its peculiar evil was actually a 'positive good,' but it failed even to convince itself."

It's disappointing that the narration lacked any life and was sleep-inducing at times.

I think this is a must for anyone with even a passing interest in the *true* history of the American South stripped of "traditions" and "lost causes."

C. Vann Woodward's reflections on the South are as powerful and meaningful today as when they were first published in 1960. This narration is marred by a wooden, robotic reader, but the content raises issues in American history that remain with us and offers useful templates for thought and even action.

Seems more historiography than history, that is a review of what other historians have said on this subject. To be fair didnt get far with this book.