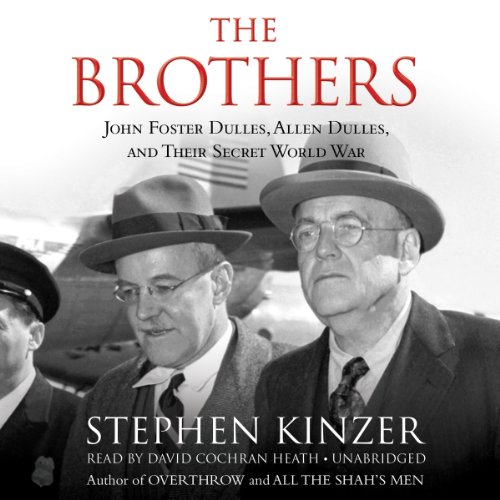 By: Stephen Kinzer
Narrated by: David Cochran Heath
Try for $0.00

A joint biography of John Foster Dulles and Allen Dulles, who led the United States into an unseen war that decisively shaped today's world

During the 1950s, when the Cold War was at its peak, two immensely powerful brothers led the United States into a series of foreign adventures whose effects are still shaking the world.

John Foster Dulles was secretary of state while his brother, Allen Dulles, was director of the Central Intelligence Agency. In this book, Stephen Kinzer places their extraordinary lives against the backdrop ofAmerican culture and history. He uses the framework of biography to ask: Why does the United States behave as it does in the world?

The Brothers explores hidden forces that shape the national psyche, from religious piety to Western movies - many of which are about a noble gunman who cleans up a lawless town by killing bad guys. This is how the Dulles brothers saw themselves, and how many Americans still see their country's role in the world.

Propelled by a quintessentially American set of fears and delusions, the Dulles brothers launched violent campaigns against foreign leaders they saw as threats to the United States. These campaigns helped push countries from Guatemala to the Congo into long spirals of violence, led the United States into the Vietnam War, and laid the foundation for decades of hostility between the United States and countries such as Cuba and Iran.

What listeners say about The Brothers

Cold war and intrigue - who could ask for more

If you could sum up The Brothers in three words, what would they be?

What was one of the most memorable moments of The Brothers?

Hearing the behind the scene stories of cold war events

all of the above

I just finished listening to Stephen Kinzer's extremely well written and researched book about the Dulles Brothers and their place in American history. The book reads like a novel but is full of great research about the 1950's, the cold war and beyond. I was mesmerized by the scope and even- handedness of the author's words. I recommend this book for all who want to have a clearer understanding of a very difficult period in our country's history. This book is a clear and fearless look at our past. The narrator of the book did an excellent job. Llisten to the audio of Stephen Kinzer's book - The Brothers- it's well worth your time.

I found this book most interesting. I knew some of the information contained in the book but this is the first time I had seen in presented in this manner. I was aware of the Dulles brothers but it did not register with me that they were both in power at the same time. The Dulles family has served the government through many generations. John W. Foster was Secretary of State (1892-93) for President Benjamin Harrison. Eleanor Foster married Robert Lansing who served as Secretary of State under Woodrow Wilson. Under FDR Allan Dulles served a decade in the State Department then served in the OSS where he was sent to Switzerland. He was to commission Carl Gustav Jung to prepare psychological profiles of Hitler and other Nazi leaders. Kinzer portrays Allen as a facile, charming womanizer with a lifelong passion for the ethos of espionage. Kinzer paints Foster as a stridently moralistic cunning strategist in international commerce. The author writes “They made an ideal team: one brother was great fun and a gifted seducer, the other had uncanny ability in building fortunes.”

Foster served as a foreign policy adviser to Thomas Dewey, the Governor of New York. Forster became an avid critic of Stalin’s essays and speeches. In 1952 Dwight Eisenhower became President and appointed Foster as Secretary of State. Allen became director of the CIA. Never before had two siblings enjoyed such concentrated power to manage United States foreign policy until the Kennedy brother came to power.

Eisenhower adopted the Containment Doctrine developed by George F. Kennan. I read “The Kennan Diaries” in March of 2014. This book goes into depth about the containment strategy. The author covers in great detail, the six different nationalist and communist movements around the world that covert action was taken by the Dulles brothers. There are Iran, Guatemala, Vietnam, Indonesia, African Congo and Cuba. Kinzer blunt assessment of Foster’s intellect, quoted Winston Churchill’s disparaging verdict that the Secretary of State was “dull unimaginative, uncomprehending.”

Anyone wanting to know why the United States is hated across much of the world need look no farther that this book. “The Brothers” is a riveting chronicle of government sanctioned murder, casual elimination of “inconvenient” regimes, relentless prioritization of American corporate interest and cynical arrogances on the part of two men who were among the most powerful in the world.

The author blames the two brothers for most of the evil of the cold war on the other hand he gives little attention to their sister who was their opposite. Eleanor Lansing Dulles graduated from Harvard with a doctorate in economics. She worked for the State Department for over twenty years overseeing the reconstruction of the economy of post war Europe. She helped establish the International Monetary Fund and the International Bank for Reconstruction and Development. When her brother, John Foster Dulles, became Secretary of State he tired to remove her from State but she successful fought him. She was hailed as “The Mother of Berlin” for helping to revitalize Berlin’s economy and culture during the 1950s. She retired in 1962 and became a professor of economics at Georgetown University.

If you are interested in history, cold war, covert operation this is the book for you. David Cochran Heath did a good job narrating the book.

Transnational capitalism is a phrase I picked up from the book. It is well-researched and the narrator is just fine. What is upsetting to me is that so much of our foreign policy and history over the last half century or more is because 2 terribly self-righteous men who sought to protect their own and their clients' wealth led us into calamitous events of epic proportion. I understand that there was hysteria about communism that now seems unwarranted with 20/20 hindsight. But, they dabbled in the affairs of other countries for sport. We are paying the price now.

Read this to Learn About America

A great book that tells the story of us, the United States, the effect that the Dulles brothers had and continue to have on our standing in the world, and how we view ourselves. This book explains how our actions during the 50s and early 60s continue to come home to roost.

A must read (listen).

A History of American Involvement in World Affairs

To quote from Gordon Goldstein's review of this book in The Washington Post, "Kinzer, a former foreign correspondent for the New York Times, displays a commanding grasp of the vast documentary record, taking the reader deep inside the first decades of the Cold War. He brings a veteran journalist’s sense of character, moment and detail. And he writes with a cool and frequently elegant style. The most consequential aspect of Kinzer’s work is his devastating critique of John Foster Dulles and Allen Dulles, who are depicted as jointly responsible for acts of extreme geopolitical myopia, grave operational incompetence and misguided adherence to a creed of corporate globalism." I really couldn't say this much better.

I would recommend this book to anyone who is interested in the history of the CIA and America's involvement in foreign affairs since WWII. I especially appreciated the last chapter of the book where the author looks at the brother's in light of their upbringing and contemporary world events.

This is one of the most well-written and interesting books on modern history I have ever read. Don't pass it up.

Stevie Kinzer,
what a man!

Of Dulles Bros
he's not a fan.

Their myriad faults
that Steve impeaches

are but the same
his volume preaches.

In arrogance
he is their equal

A well-written biography (e.g. The Last Lion series) should present the life of its subject with clear vision and help you understand on a fundamental level who that person was and why he or she was significant. It requires sympathy, nuance, and a deep understanding of how that person thought and acted. Unfortunately, this book doesn't even make it into the biography category--this book correctly falls into the expose category alongside cheap political hatchet jobs. Here there is no nuance, no attempt to understand, and no balance. Stephen Kinzer gives you the impression of being barely able to keep his rage contained as he wrote this book. As a result, you will learn a great deal about Stephen Kinzer's personal and political beliefs, but very little about those of the Dulles brothers. Kinzer is so lopsided in his appraisal of the brothers, that he loses the most important thing a biographer can possess: the trust of his reader. There are always multiple sides to an issue--but this book only lets you see one side of every issue and every set of facts. Further, a good biography judges its subject by that person's time. You don't judge Genghis Khan against modern Western norms--you judge him by his time. How did he stack up against other leaders of his day? This book doesn't give you that perspective. You will learn all about how the Dulles brothers stack up against Kinser's personal moral norms, but not much about how they stacked up against the leaders of their time. I would recommend Kinser go find a job at the National Enquirer where his work will fit right in.

Clearly, the world we live in today is strategically very different and full of facts not available to the Dulles brothers. Although I am not a fan of the Dulles' body of work, the author vilifies the two in light of the current world situation with but a cursory tip of the hat to the old adage of "Hindsight is 20/20."

All in all, a good read.

I enjoyed this book and would recommend it, but it is largely a re-write of Overthrow and it does not present enough rationale for why Eisenhower and the American people supported the Dulles brothers view of the world. The book begs for a counter-balancing account of the Soviet actions in the world in the 1950s. Kinzer blames irrational mass hysteria for creating an American mindset that encouraged the overthrow of many governments during the Eisenhower and Kennedy administration's, but that is too simplistic. There were real reasons for the fear and Kinzer should have acknowledged that. It would have made for a better history.