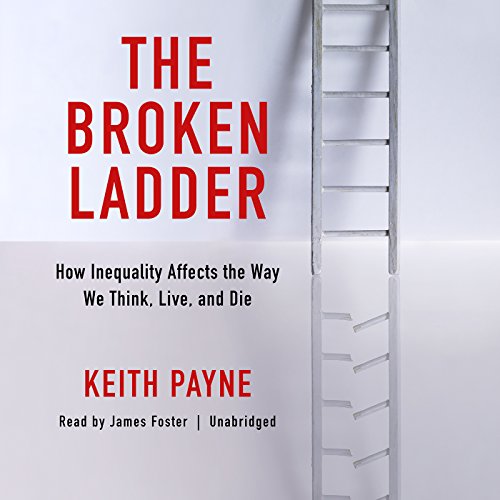 By: Keith Payne
Narrated by: James Foster
Try for $0.00

A timely examination by a leading scientist of the physical, psychological, and moral effects of inequality.

Today's inequality is on a scale that none of us has seen in our lifetimes, yet this disparity between rich and poor has ramifications that extend far beyond mere financial means. In The Broken Ladder, psychologist Keith Payne examines how inequality divides us not just economically, but also has profound consequences for how we think, how our cardiovascular systems respond to stress, how our immune systems function, and how we view moral ideas such as justice and fairness.

Experiments in psychology, neuroscience, and behavioral economics have not only revealed important new insights on how inequality changes people in predictable ways, but have also provided a corrective to our flawed way of viewing poverty as the result of individual character failings. Among modern developed societies, economic inequality is not primarily about money, but rather about relative status: where we stand in relation to other people. Regardless of their average income, countries or states with greater levels of income inequality have much higher rates of all the social problems we associate with poverty, including lower average life expectancies, serious health issues, mental illness, and crime.

The Broken Ladder explores such issues as why women in poor societies often have more children, and have them younger; why there is little trust among the working class that investing for the future will pay off; why people's perception of their relative social status affects their political beliefs, and why growing inequality leads to greater political divisions; how poverty raises stress levels in the same way as a physical threat; inequality in the workplace and how it affects performance; why unequal societies become more religious; and finally offers measures people can take to lessen the harm done by inequality in their own lives and the lives of their children.

What listeners say about The Broken Ladder

wow this one needs to be read by everyone. I am a conservative and this book showed me several areas where I have been mistaken in my thinking.

Most enlightening book I’ve read in at least 25 years

I have a BS in Finance and in MBA in International Business. The first half of my career, I worked in corporate finance climbing the corporate ladder. For the past 10 years, I’ve been an executive at a non-profit that helps those that are or the lower half (likely 2/3 based on NJ income) of the income ladder.

This book expanded my idea around inequality and the true effects it has on society and life. I appreciated the numerous references to studies and specific ideas I hadn't really reflected on before. Well read and quick as well. I'd recommend this book to everyone.

There author has a very liberal perspective which will frighten some readers away from finding the truth in what is being said. My daughter is reading this for a college class and I am glad she is. I wish I had time to add this to my high school class. There is so much valuable information and reading this could potentially change your outlook on life.

Changes perception of poverty and inequality

After listening to this book, I have a greater appreciation of what the social problem of inequality is, as opposed to merely the social problem of poverty. The author does a great job distinguishing the two, and describes political sides but doesn't take one because addressing inequality doesn't fit traditional molds. It was also helpful to hear about the different decision processes that high status and low status individuals employ. I am not a social scientist, but the author did a good job of citing social science experiments that support his assertions. I came away with the opinion that we would have a stronger, more united country if we had some policies to address inequality.

I had to read this for college, so I wasn’t exactly looking forward to spending time when I could be reading other books. However, the contents of the book gave me a new perspective and brought things to my attention that I hadn’t considered before. The only bad thing is that the physical copy as some visual aids that can’t be translated into audio, so you may still want to pick up the actual book to get the full experience.

I work for Habitat for Humanity

We build homes in poor neighborhoods and wonder why homeowners don’t succeed at higher rate. Now I know.

Great evidence based commentary on inequality. I appreciate that the author cited studies to support the rationales.

A captivating and a brilliant book

This book is detailed with well researched data. The writer does an awesome job being impartial. The diverse topics researched really opened my perspective. To stop looking at issues from one side but instead from an objective and centrist point of view. He vividly describes about inequality, how worse it’s got every year and the repercussions for that. I highly recommend it.