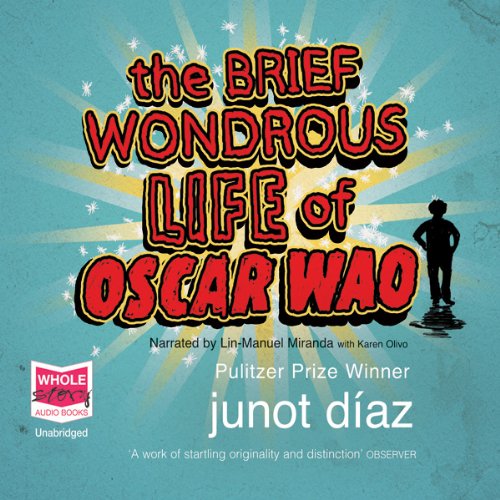 By: Junot Diaz
Narrated by: Lin-Manuel Miranda,Karen Olivo
Try for $0.00

Things have never been easy for Oscar. A ghetto nerd living with his Dominican family in New Jersey, he's sweet but disastrously overweight. He dreams of becoming the next J R R Tolkien and he keeps falling hopelessly in love. Poor Oscar may never get what he wants, thanks to the Fuku - the curse that has haunted his family for generations.

With dazzling energy and insight Diaz immerses us in the tumultuous lives of Oscar; his runaway sister Lola; their beautiful mother Belicia; and in the family's uproarious journey from the Dominican Republic to the US and back.

Rendered with uncommon warmth and humour, The Brief Wondrous Life of Oscar Wao is a literary triumph that confirms Junot Diaz as one of the most exciting writers of our time.

What listeners say about The Brief Wondrous Life of Oscar Wao

Helps if you speak Spanish!

The narrators were of a high standard, but there is a fair amount of spanish used throughout the book. I'm told the print version translates the spanish in footnotes and I certainly would have got more from the audiobook had those footnotes been incorporated. Nonetheless it was a good, though depressing, listen.

Excellent blend of story and history

When I started reading about Oscar Wao, I did not expect a lesson in Dominican history. I don't love history, but it is pivotal to the stories of Oscar's family members (and indirectly Oscar himself), and the author does a great job at keeping it compelling throughout. A couple of notes: -Oscar is the least interesting character, which is unfortunate. I think he even gets less "screen time" than other characters. This is to the book's detriment, as when you start reading about the others, it feels like you are going on a long detour, when that is the meat of the novel. -Regarding the Spanish content: it is slightly frustrating at times that there is no English translation for words and phrases, especially because you can't copy/paste it into Google Translate. However, you can get the gist from the context, and it is never all that much of a problem. Don't let that deter you from listening.

This has been by far one of the best stories I have had the pleasure of listening to. The reader was beyond fantastic, which took this already great book to a whole new level. Bravo.

didn't want it to end!

A fantastic story - both hilarious and tragic at the same time. Had me laughing out loud and choked up too. The narrator was amazing and made the story for me. 100% recommend!

I have no idea how this story was awarded a Pulitzer Prize. To me it feels more aimed at young adults - certainly this reading makes it feel this way & the main narrator of the story feels better suited to a younger audience.

I couldn't buy in to the story at all. Some of the characters, yes, especially the female ones. But Oscar - the main character - felt completely inaccessible to me. I didn't see any development in him throughout the storyline & his "achievements" seemed to be more down to luck than personal growth. As a character he was very limited.

Little about Oscar's own life seemed "Wonderous" to me. His family history certainly had some interest in it, but his own life held little.

Oscar's friend "Junior" the narrator seemed a strange choice to tell the story of Oscar's family as it seemed unlikely he'd have had access to as much information as the story contained.

I persisted to the end with this one but it felt like wasted effort.

So close to a 5 * the narration was perfect, and the odd Spanish sentence doesn’t detract from the story so ignore those reviews, I know so little Spanish and it was no big deal. Listen to this story, you will learn , you will laugh and you will cry, and you will enjoy!

Awesome, educational, revolting, heartbreaking. I highly recommend this book. It's told in such a great way. So honest and with such cool references. It just blew my mind.

The Bard of Silk City

Junot Diaz is well known and this novel was much anticipated through his short-story work on The New Yorker and on that basis, I dived into this full length novel with relish. It represents a fresh voice which stands apart, above and beyond lots of new millennium city-lit in the States and is an invigorating read, though not necessarily from start to finish.
There are definite high-points through the narrative - in particular long sections of The Three Heartbreaks of Belicia Cabral and Poor Abelard are really engaging and fascinating for someone who knew nothing of the brutal regime of Rafael Trujillo its history and impact on the Dominican Republic - and these sections alone are worth the money. Elsewhere, the ?modern? GhettoNerd at the End of the World , whilst well ornamented, does not seem to sparkle to the same extent that is suggested by the wonderful ?Alma? on which the earlier expressed anticipation was based. Junot Diaz has certainly found the voice of Silk City, but the short-comings of Oscar as a central character on which to hang the narrative translates to a little disappointment on my part - whilst I?m really not interested in Star Trek and Marvel the litter of detailed Dominica detritus sustains the work through the less than dazzling sections. Maybe more (or is that less) simpatico on the part of hombre Wao might have livened this one up to consistent heights - but that?s just small potato criticism of a highly original and entertaining new voice on the New York scene.

Funny and tragic in turns

I enjoyed this book, the interweaving of the history of the Dominican Republic alongside the history of Oscar's family was fascinating. The only issue for me was that I am not a Spanish speaker, and as the author frequently reverted to his native tongue. This felt very right within the context of the story, but because he provided no explanation of what he was saying,it felt as though I was missing quite a bit.

It's easy to see why this book is being hailed as the next modern classic, it's extremely well written with a very human and intriguing story. The different characters are all well developed and have their own distinct voices. The narrator does a brilliant job. Highly recommend, I only wish I spoke better Spanish, I'm going to be spending a lot of time on Google translator for my next listen!

I love the story and I love the performance. Is this the first time a Pulitzer winner is narrated by a different Pulitzer winner? Ipf I have a criticism, in the US most people may have rudimentary school Spanish. Other English language countries, not so. Translations alongside the frequent Spanish would have been helpful.

I would give this book a thousand starts if I could, amazing in every way.

Lin-Manuel adds a lot to the story

I've read the book a couple and thought I'd give the audiobook a go as I'm a fan of Hamilton. This performance adds so much to the book. Exactly what you want from an audiobook. The novel itself is one of the best pieces of modern story telling .

I need to be honest; I had to "read" this for a university course, and I would have never been able do it had I not been pressured to do so. I did not enjoy the story, although I found the changing perspective to give the book more dimensions, which enhanced the experience somewhat. The narrators are doing an incredible job, so kudos to them.

A joy of a read

I have seen this book on many must-read lists. I was impressed by the reading and it is a great story, sad, poignant, all the things I like in a book. Listen and enjoy!

Lin-Manuel Miranda says the n-word in this audiobook a lot of times. He does a very good job at narrating, but I think they should have gotten a black person to do it. Karen Olivo also does a good job at narrating, but in my opinion, her voice is too perfect for this story. Her voice has no character in it, it's just flawless, like Siri. It's a good book about Dominican culture and history. It's not the sort of thing I usually read, but it was enjoyable.

Both disturbing and engaging.

Beautifully read. Some have expressed concern over the amount of Spanish, but I think it works well in emphasising that sense of estrangement for those of us reading from an outside perspective. Love the underlying nerd narrative. For me, that was a wonderfully accessible aspect of the novel.