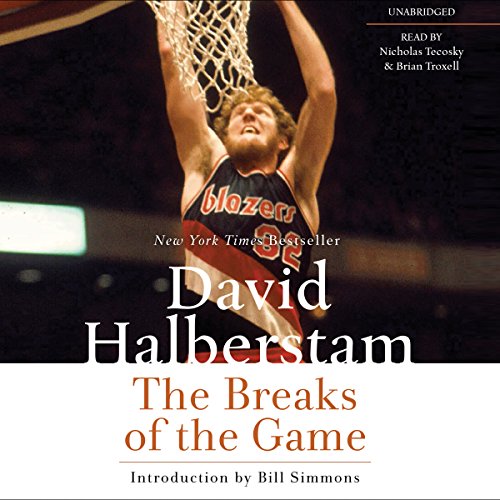 The Breaks of the Game

By: David Halberstam
Narrated by: Brian Troxell
Try for $0.00

A New York Times best seller, David Halberstam's The Breaks of the Game focuses on one grim season (1979-80) in the life of the Bill Walton-led Portland Trail Blazers, a team that only three years before had been NBA champions.

More than six years after his death David Halberstam remains one of this country's most respected journalists and revered authorities on American life and history in the years since WWII. A Pulitzer Prize-winner for his groundbreaking reporting on the Vietnam War, Halberstam wrote more than 20 books, almost all of them best sellers. His work has stood the test of time and has become the standard by which all journalists measure themselves.

The tactile authenticity of Halberstam's knowledge of the basketball world is unrivaled. Yet he is writing here about far more than just basketball. This is a story about a place in our society where power, money, and talent collide and sometimes corrupt, a place where both national obsessions and naked greed are exposed. It's about the influence of big media, the fans, and the hype they subsist on, the clash of ethics, the terrible physical demands of modern sports (from drugs to body size), the unreal salaries, the conflicts of race and class, and the consequences of sport converted into mass entertainment and athletes transformed into superstars - all presented in a way that puts the listener in the room and on the court, and The Breaks of the Game in a league of its own.

What listeners say about The Breaks of the Game

This book is a must read for all NBA junkies.

This book is a must read for NBA junkies. This covers an in-depth look of the Portland Trail Blazers from 1977-1980. Led by Bill Walton, the '77 Blazers thrilled many basketball purists with their unselfish style of play. Following the '77 season, injuries and chemistry problems led to decline of the team and their unsuccessful pursuit of a potential dynasty.

More importantly, the story also tackles many topics such as race, racism, contract disputes, loyalty, television advertising, team chemistry, team politics, Bill Walton, corruption in college basketball (this is in the 70s which is crazy!), college vs. pros, the Blazers making one of the WORST trade of all time by trading Moses Malone to the Houston Rockets for a bag of chips, a player by the name of Marvin Barnes who could've been the GOAT but ruined his career by doing drugs and many more.

Truly one of the all time great sports books

The fact that Halberstam, a world renown American historian, put as much effort into chronicling an era of the NBA as he did with wars and presidential administrations makes this a must read for any sports fan, even if basketball isn't your thing.

Wonderful, a must for any NBA fan.

This is a wonderful book and is beautifully narrated. If your a Blazer fan or general NBA fan you have to read/listen to this book, it will give you a greater appreciation and understanding of the people that make up the greatest league in professional sports.

Loved the book, especially the parts about Walton and the San Diego Clippers. I was first introduced to basketball in San Diego in late 1978 as a first grader. Was obsessed with the sport especially the high scores and the even taller players. Brought back excellent memories of my early years of fandom.

The writing was excellent and the back story on the players and the league was phenomenal.

Great book - lots of details and side stories.

Great insight on race relations which makes it applicable for now.

Good book but dated. It's not like a true history. I know that this is sacrilegious to say about David Halberstam, but I just listened to Bill Walton's own book that he wrote and read for Audible, and it seemed more accurate and MUCH less dated than this, in both style and general content. Yes, I KNOW it's history, but there are different ways to read and write about history, right?

I listened to this book for the first time ever and it is spectacular. In some ways I enjoyed more looking at it through a current lens with the aged topics.

He weaves in and out of storylines marvelously. I realize how this writing inspired a lot of current writing and podcasting.

I listened while working out, making dinner, cleaning my place etc and it worked every time. A perfect type of book for audio.

A look at the past in the NBA

Great look at the Blazers and the NBA era in the late 70s. Halberstam weaves in interesting stories on some famous and not so famous players while illustrating the challenges the league had prior to Bird and Magic coming into the league.

The best book about pro basketball

Great behind the scene story of pro basketball in the Walton era. The portraits of the players and coaches are revealing.

As a Basketball enthusiast and Youth Coach I thoroughly Loved this insider’s take on my favorite league. I was in 4th-5th grade during the time of this publication and it was Great marching the personalities with the names I idolized (Magic Johnson, Kareem, Walton, Billy Ray Bates)