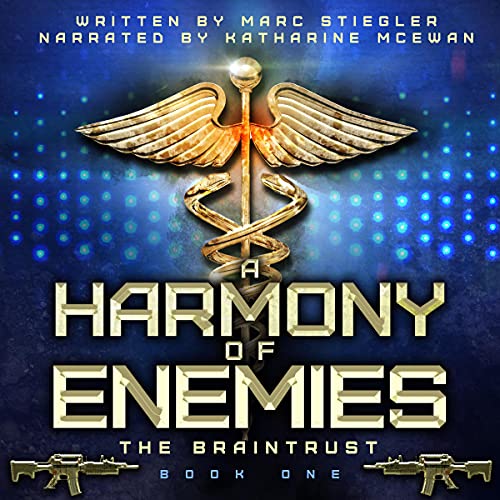 By: Marc Stiegler
Narrated by: Katharine McEwan
Try for $0.00

Her research to prevent death could get her killed.

The BrainTrust was first built to be home for all the Silicon Valley immigrant engineers expelled by the Red government. With its growing fleet of cruise liners anchored far off the coast of San Francisco, it has become the source of many of Earth's innovations—innovations that threaten the dogmas of every power bloc in the world.

As the BrainTrust's uneasy peace with the Reds, Greens and Blues unravels, the brilliant young researcher Dr. Dash arrives with plans to take the first step toward a cure for aging. Crisis follows on her heels: The man who most needs Dash's therapy is the American President for Life. His Chief Advisor will stop at nothing to grab the cure and the young scientist herself. Dash soon finds her fate inextricably bound with the fate of the BrainTrust itself.

The BrainTrust has no Army, no Navy, no Air Force. Their ships have neither weapons nor armor. Yet a key question remains: Can a society that has earned the name BrainTrust ever be truly defenseless?

If you like Heinlein's Moon Is a Harsh Mistress, or Vinge's Peace War, or if you simply want to explore the consequences of a future based on today's radicalized versions of America, welcome to the BrainTrust.

What listeners say about The Braintrust

Needs a new narrator, her pacing and emotion seemed way off.

I was worried that this might be too liberal for me, however he toed the line very nicely between the sides. However, he probably should’ve left his comments at the end of the book off. They kind of turned me off for this author.

A look at the future?

This was satirical look at the future of America. The characters were well fleshed out and the story kept me interested. I found the book both humorous and depressing because of the subject matter being so close to reality.

I want to say thank you to Michael Anderle for recommending this book. I read the book and then immediately listen to it on audio. The narrator was clear and easy to understand. My first audio with this particular narrator. I do wish narrator used more emotion/inflections. The book has a lot of technical terminology and descriptions so for me i had to do the book twice. A lot of wording to set up the the new world and describe how life is for the characters. I enjoyed Dash our main character a lot and her 2 best friends/protectors Jam and Ping. When the big fight scene converged the groups I was blown away. Did not see that coming. Nice twist. Looking forward to book 2 and the audio.