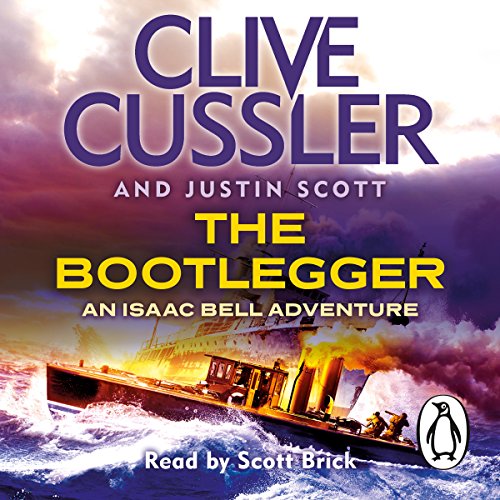 By: Justin Scott,Clive Cussler
Narrated by: Scott Brick
Try for $0.00

Penguin presents the unabridged, downloadable, audiobook edition of The Bootlegger by Clive Cussler and Justin Scott, read by Scott Brick.

It is 1920. Prohibition and bootlegging are in full swing. When Joseph Van Dorn is shot and nearly killed while in pursuit of a rum-running vessel, his friend and employee, Isaac Bell, swears to him that he will hunt down the lawbreakers. But Bell doesn't know what he is getting into.

When a witness to the shooting is executed in a manner peculiar to the Russian secret police, it becomes clear that these were no ordinary bootleggers.

What listeners say about The Bootlegger

The Bootlegger - its good, but not the best...

I'd recommend the entire Isaac Bell series. I'm a real fan and the adventures are first rate

Would you be willing to try another book from Clive Cussler and Justin Scott ? Why or why not?

I'm trying to find the ones I haven't listened to!

What does Scott Brick bring to the story that you wouldn’t experience if you had only read the book?

Scott brick IS Isaac Bell. I couldn't imagine anyone else narrating the Bell Series. His portrayal of Bell, Van Dorn and the various other characters are superb.

If I could, I would!

The Bootlegger is another enjoyable installment, although maybe slightly weaker than previous adventures. Still, If you've enjoyed other installments of the series, then you'll enjoy this.

I enjoy this series very much. The bootlegger was just as well paced and intriguing as the previous books. I drive for work and sometimes my day finishes too fast and I have to wait overnight for the next chapter 😊
Isaac Bell is more experienced in this story. He meets many new characters along the way in his search for the bootlegger who harmed his boss. There’s more going on than Isaac anticipates. Listen in and you won’t be disappointed

Great story. Great narration by Scott Brick. a book you must listen to. in fact all if the series are great