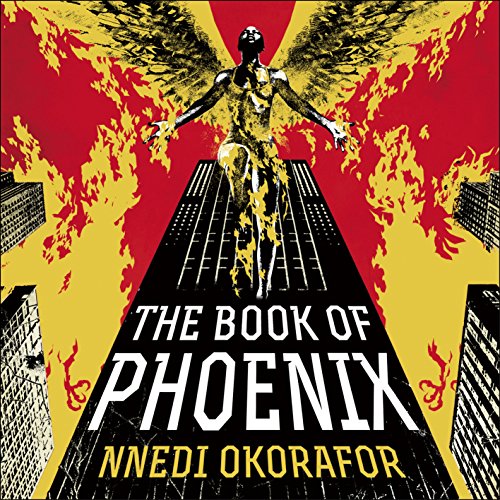 The Book of Phoenix

By: Nnedi Okorafor
Narrated by: Patricia Rodriguez
Try for $0.00

They call her many things - a research project, a test-subject, a specimen. An abomination.

But she calls herself Phoenix, an 'accelerated woman' - a genetic experiment grown and raised in Manhattan's famous Tower 7, the only home she has ever known. Although she's only two years old, Phoenix has the body and mind of an adult - and powers beyond imagining. Phoenix is an innocent, happy to live quietly in Tower 7, reading voraciously and basking in the love of Saeed, another biologically altered human.

Until the night that Saeed witnesses something so terrible that he takes his own life. Devastated, Phoenix begins to search for answers - only to discover that everything that she has ever known is a lie.

And it's time for Phoenix to spread her wings and rise.

Spanning continents and centuries, The Book of Phoenix is an epic, incendiary work of magical realism featuring Nnedi Okorafor's most incredible, unforgettable heroine yet.

What listeners say about The Book of Phoenix

At the start I would have, but having got to the end I am not so sure.

There are some beautiful, colourful ideas and vivid writing, although it felt structurally flawed and many important and interesting themes were not really given their due.

Was The Book of Phoenix worth the listening time?

There is a lot to enjoy here. The book is beautifully written and highly imaginative as well as showing its world from a different perspective than that typically found in science fiction. If you are a fan of hard science fiction, then this is definitely not the book for you -- here the science is not the point. It;s the relationship between Phoenix, who is a person created by a faceless corporation, and the power structures around her.

That said, this book feels structurally flawed. Highly convenient things just magically happen to the main characters. The faceless and powerful corporation which represents the antagonist at times seems to be run by utter and complete idiots. It was also rare to feel that the characters ever feel in any genuine jeopardy -- they are all so godlike in their powers that the plot frequently feels like a polite dalliance.

There's a child-like quality to the narration. This is reflected partly in the innocence of the main character and partly in the musical, story-time quality of Patricia Rodrigues' presentation. At times this really works, making certain moments more piquant for the fact that the reader can see what's coming when the character can't, but at other times it can feel patronising. Several times the author seems to feel the need to telegraph cultural references which would be more satisfying unexplained.

There's also a strong notion that Phoenix can basically do anything -- here powers are such that she never has difficulty using them, and of course she has a more powerful (male) mentor who laughingly explains that she just needs to think of something to do it. This doesn't make for a very satisfying narrative -- everything is far too easy for her, and her enemies are too stupid and bigoted to represent any serious challenge.

There are some fascinating political and social themes here, though. The portraits of Ghana and Nigeria as nations continuing to suffer from the same colonialism that built the slave trade, now faced by corporations hungry for oil and genetic experimentation is powerful and compelling, as is seeing this through the lens of the story, but it felt like this was too rapidly rushed through and more time could have been given over to exploring it in more depth.

Overall this was an enjoyable book, made frustrating for the sense that it could have been truly great.

Interesting book, marred by awful over the top narration

The narration on this leaves the listener no space to interpret what they are listening to themselves. Ruined.

Not very good at all

Starts off pretty okay but the longer it goes on it just gets worse. The characters act really stupid sometimes which leads to some of there avoidable deaths. On one occasion it turns out they're not really dead and they don’t really give an explanation why. But the real sticking point for me is when the main character suddenly learns the ability to time travel with little explanation and build-up. And for some reason this doesn’t immediately solve all of their problems. It’s Time travel you just can’t include something like that and and not explain it thoroughly. And the book constantly reminds you of things you already know like where the characters came from and what they did a few chapters ago. It gets tiring after a while. Also, this book feel slightly racist towards America. I am not American and to be fair it does make sense the characters think that way but they just constantly go on about it it makes me feel uncomfortable. But that’s a very complex issue that I don't really feel I have the knowledge to say for certain but it's just my opinion.
So overall stupid characters unexplained overpowered abilities and potentially racist. You’re better off listening to something else.