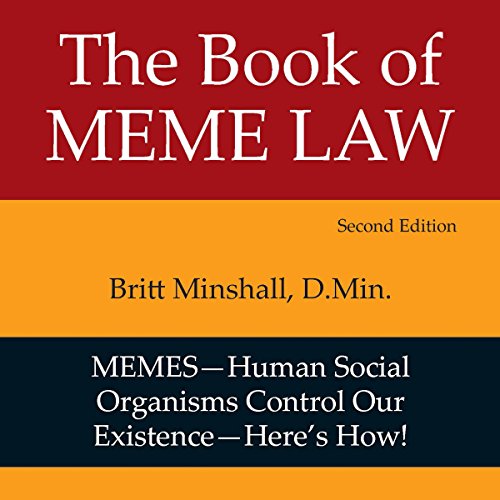 The Book of Meme Law

The Book of Meme Law

The greatest mystery about all human behavior has now been exposed.

Did you know there are two of you: one the individual (physical soulful self); the other, the social self (meme member). There is rarely a connection between the two.

Question: Ever wonder why:

• The religious, who "believe" in love, kill so often?

• Humankind does the same destructive things? Over and over again?

Now for the first time ever, understand how the world really works. You'll be able to predict the next chapter. The book of meme law exposes:

If you've ever experienced your life and the world out of control, understand why, and take control!

Now for the first time ever, the biggest secret in history, "meme law", is revealed!

Not actually book about memes

This is a mediocre book about organizational behavior drowning in the author's eccentricities and blinded by his philosophic assumptions. Essentially, it's shallow.

I'm betting he either didn't read or didn't understand Dawkins' logical connection of memes to genes. He continually uses the word "meme" to refer to what could be better described, using the gene-meme construct, as either phenotypic expression or genetic signaling - such as a mating competition strategy Dawkins describes in bird species. (See Dawkins' The Selfish Gene)

Now these topics are not unrelated, but its simply superficial to talk about these strategies without discussion of their particular contribution to the specific "memetic spelling" (if I may stretch the biological metaphor) that birthed them. He's one level above memes. Essentially he's engaging in game theory within predetermined rules, he's NOT engaging in a meta-discussion of how memes CREATE the rules of that game. A very similar, deeper and more thorough discussion of the (non-meme) topics he discusses can be found in "The Dictators Handbook," which I would suggest instead.

If you have already read this book then let me clarify what a meme is, using this author as a solid illustration. It is obvious in the discussion of his values he is unprepared to state WHY he holds his values, how they were adopted and/or what purpose they serve. THAT would be the meme .. not what the values (memes) make him do once he has adopted them .. that would be the phenotype.

I would guess his belief system, memeplex, is formed around a memetic code that gives him guilt over a sin nature which must primarily be absolved via social absolution .. thus he includes a series of unrelenting lectures about how he personally identifies with the most moral and enlightened among us and is not one of "the enemy" group. The annoying virtue signaling serves this meme rather than the stated purpose of the book, attempting to procreate his morality in the reader by something other than logical argument, and avoiding the presentation of a defense and/or enumeration of his actual values .. (argument requires presentation of an opposing meme / viewpoint and risks the procreation of an opposing meme). In short, you know they are actual memes because they are assumed, not argued. - Although I'm a theist, this is something I deeply appreciate about Dawkins' anti-theism books, he is not a slave to his memes, and does his best to steelman his opposition .. which is the mark of actual free-will.