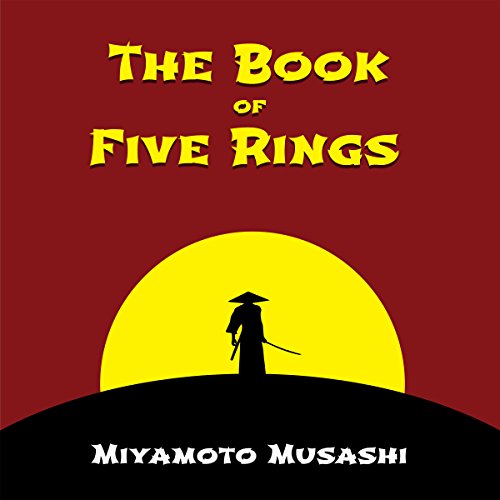 The Book of Five Rings

By: Miyamoto Musashi
Narrated by: Jimmy Kieffer
Try for $0.00

The Book of Five Rings is about Kenjutsu and the martial arts in general, written by the Japanese swordsman Miyamoto Musashi around 1645. There have been various translations made over the years, and it enjoys an audience considerably broader than only that of martial artists and people across East Asia; for instance, some foreign business leaders find its discussion of conflict and taking the advantage to be relevant to their work in a business context.

Musashi establishes a "no-nonsense" theme throughout the audiobook. For instance, he repeatedly remarks that technical flourishes are excessive and contrasts worrying about such things with the principle that all technique is simply a method of cutting down one's opponent. He also continually makes the point that the understandings expressed in the audiobook are important for combat on any scale, whether a one-on-one duel or a massive battle. Descriptions of principles are often followed by admonitions to "investigate this thoroughly" through practice rather than trying to learn them by merely reading.

What listeners say about The Book of Five Rings

The Samurai way of thinking and living your life.

This is not merely a philosophy of fighting and military tactics but a view on how a human being should live their life.

The Narrator enables the listener to better appreciate the ideas that encompass this classical work.

Musashi may have been the greatest swordsman that ever lived. His prowess with a blade and understanding of all things martial are poorly reflected in his writing, since one cannot fully grasp his meanings from text alone. Only a direct student of his could receive such a blessing of knowledge, and few of them were ever able to comprehend it fully. Musashi wrote this text in five pieces, which run from Earth, Wind, Fire, Water, and the Void. Each section describing seperate aspects of battle, be it in solo combat or all out war. His message is still intensely viable today, but in essence it is about minimalizing yourself. Do not at flourish, do only that which is necessary. Practice with a longsword in each hand simultaneously, so that you are ready to defend from all sides; and so on. He is a genius. Pair his writings with Sun Tzu's and you may get a greater grasp on how to survive and dominate in your life. This text has been around since about 1645, and it still speaks to the modern man.

The real question is how did Jimmy Kieffer do with the narration? Since Musashi hasn't added anything new, he is the only reason to check this book out (unless you've never read the five rings before). Kieffer does a fantastic job narrating. His voice is pleasant to listen to, and he tell everything in a no nonsense matter of fact way that avoids becoming boring. He does not drone, he intones. He is crisp, clear, and a easy to follow along to, well worth it to listen to him. He is very professional. Even though I did receive a promo code for this review it in no way influenced my considerations of the material, and in fact, inspired me to be more honest. In fact, getting a code generally makes me harsher as a reviewer as I am more often concerned what someone like Me will decide based on my review.

The Strategy of a Successful Martial Artist

This audiobook is all about the strategies of an effective martial artist.

This is an interesting and informative audiobook, a must-read (listen) for any serious martial artist. The concepts and strategies presented are logical and easy to follow, and it is the type of book where you are likely to gain new insights about martial arts with each listen.

The narrator had a pleasant voice, and his intonation and cadence made the material easier to absorb.

This treatise has some high points; however, too often, just when it us getting interesting, musashi says, "you should study this further." This happens dozens of times. Basically, the book encourages us to practice our art.

I see a lot of comparisons between this and 'The Art of War' by Sun Tzu, specifically with regards to its applications in non-martial fields. While this is certainly true to some degree, I found 'The Book of Five Rings' to be more dry and technical. It is clearly geared toward students of swordsmanship and the way of the samurai. 'The Art of War is much easier to draw broad lessons from in my opinion

Jimmy Kieffer's narration is solid and clear, and it really emphasizes the teaching nature of the work.


Overall it's a solidly narrated edition of a classic text, albeit a bit too dry and specialized for my taste.

Good things in a small package

Good audio recording of the classical book. Similar to 'The Art of War' in that it is a book you can find applies to other applications. It is clearly focused on the way of the samurai and there are general takeaways as well. The narration is high quality and fits the book well. This book was given to me for free at my request and I provided this voluntary review.

I enjoyed listening to this book. I was glad to have this book in audio format because I'm not sure I could have gotten through it in the print version. The narrator does an excellent job and I appreciate that he didn't try to make this an entertainment piece. He read it as it should be read, with the proper gravity and respect it deserves.

The book of Five Rings

An interesting performance of an ancient text. The skills of swordsmanship are covered, and while not really relevant in the literal sense, I can appreciate the concepts.

Jimmy Kieffer did a nice job presenting the work.

Not trained in The Way Musashi advocates of battle with long sword and short sword with intent to kill the enemy, it took me awhile to adjust to his use of terms throughout. He defines a term and describes the movements or combination of movements denoted by the term.

I had hoped to metaphorically apply his strategies and stances and attitudes, and some of that is possible, but absent the intent "to kill" and finding no one I consider an "enemy to kill," little of his instruction is applicable for me.

This is truly a guide for those studying and practicing battle with long and short swords, to kill their enemies in battle.

Jeff Kiefer's delivery was easy to listen to, once I realized the book is primarily a glossary of terms with definition and description of each. And,thus, repetitive when associated terms appear again later.

I would have preferred a slightly longer pause before each term to distinguish it from the break between sentences. Even a slight change of inflection to indicate each new term would have been helpful to this listener.

I received a free copy of this audio book at my request, and here offer my honest review.

I've wanted to read Musashi's Five Rings for a very long time, but I could never break into the text. This audiobook is my opportunity to delve into his story. I'm quite impressed by the clear, well-spoken narration and the excellent text so far.