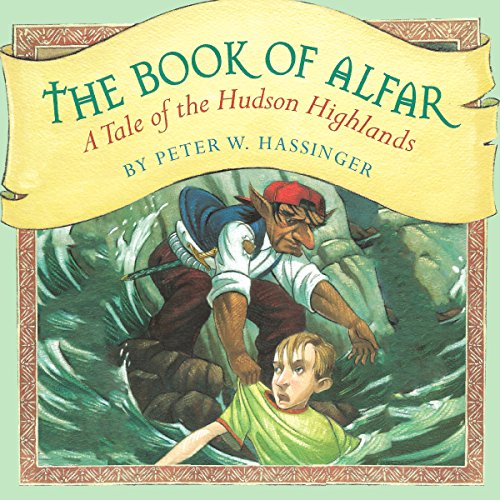 The Book of Alfar

Sander's move to the country brings surprising changes to his young life. Their new/old Dutch farmhouse has some unusual inhabitants. His parents squabble. His sister, who used to be his ally, abandons him to become an obnoxious teenager. The woods surrounding his new home, however, provide a strange refuge. There, he discovers a fairy world of dwarfs, pirates, wandering ghosts, and a ruthless Lord of Dunderburg Mountain, as an old legend continues to unfold. With the help of a shy dwarf named Alfar and Mini, an Algonquin girl steeped in the lore of the region, Sander embarks on a magical, swashbuckling adventure where only he can tip the balance in a world struggling between good and evil.

What listeners say about The Book of Alfar

The book of Alfar

I enjoyed this book!Peter Hassinger is a gifted writer and narrator.Alfar is a young elf who befriends our main character Sander.With a move to a new house and a sister who is too big to play with him,Sander takes to the woods...and the magic begins.
I was given this book free for an honest review.

STORY LINE: A delightful, magical coming of age story. I loved how the hero in the story has supportive loving parents and good healthy friends. I loved the character development, and found myself rooting for the characters throughout the book I have already suggested the book to my children to read.

NARRATOR: The author narrated this book. I was not expecting it to be as good as it was. He did an excellent job.

OVERALL: Terrific book. Fans of Harry Potter will love this.

My son and I enjoyed this story. Easy to grasp fun. And interesting characters. Great magical adventures just enough of everything to keep us interested. Well narrated and well written. Will look for the rest of the series. I received this audiobook from the author narrator or publisher for free via audiobookboom in exchange for an unbiased review

I grew up reading Narnia and Prydain books, and discovered Harry Potter as an adult. I asked to review this book partially to have something to listen to with my children. It didnt disappoint. It had that magical quality I remember from Lewis and Alexanders writing, a feeling of being in another place and time. With some really fun characters, a villain that was, well, villainous without being too scary for kids, and a plot that weaves a magical swashbuckling adventure, it is a sure hit with parents and children alike.
The Author self narrated, and you can tell this was a labor of love for him. He was careful to give each character a life of their own, making them come alive in the listeners imagination. Any fan of C.S. Lewis or Lloyd Alexander should enjoy this book.

I was given a copy of this book at no charge by the author in exchange for an honest review through Audiobook Boom.