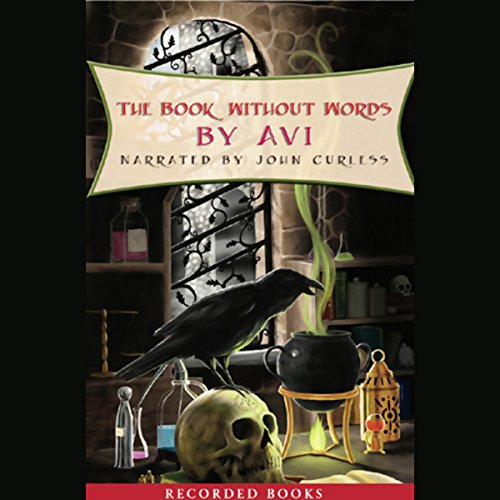 The Book Without Words

"This is a story with a message, a true fable. Thoughtful readers will devour its absorbing plot and humorous elements, and learn a 'useful truth' along the way." (School Library Journal)
"Avi's name on the cover of a new novel is enough to provoke shivers of anticipation in many readers, and in this 'Fable of Medieval Magic' set in eleventh-century England, shivers are certainly warranted." (Booklist)

What listeners say about The Book Without Words

Reviewing for my 8 year old.

We listened to this book at the request of my 3rd grader (who is now a 4th grader as this is a delayed review). She had fond memories of a 2nd grade teacher reading this to the class. Our family had a great time listening to the Audible version on a drive to the mountains. My kid's knowledge and love for the fantasy genre has grown immensely in the last couple of years and I expect she would feel this story not quite up to her current standards. (however, she's now in WoT / LOTR territory)

a simple tale told simply with a plot line which hinged very little upon the fact that it was set in the early medieval period. perhaps best suited for young readers ages 8 to 10 preteen.

You cannot beat an Avi book

What did you love best about The Book Without Words?

The humor and the distinct personalities of each character (as well as their intentions). Many would be just like we have today. The uniqueness of the story was great

I think the character Alfric. He is just a pitiful character but he does what he is supposed to do and in the end, he is rewarded. The good are rewarded, the bad punished and while no, it's not true, in real life the bad do not always get punished, that is what we read books for....to set the world right in our minds (or at least I do)

Probably where the old man rises from his grave and Damien is complaining about how dead men should stay dead. Totally unlikable Damien is, but I found his sense of humor amusing.

Not really. It just gave me an escape for a few hours and it was a wonderful escape (not that I have a bad life but everyone needs to escape into the pages of a story now and then) it was at that.

I guess I did have an extreme dislike for Odo but he was necessary in the book so his character makes sense.

Nope, only that I recommend it very much.

Would you try another book from Avi and/or John Curliss?

What could Avi have done to make this a more enjoyable book for you?

The world he created was to small and uninteresting, and the charecters were to stereotpical and flat. They didn't go anywhere.

He Did teach me a latin phrase through constant (too much) repetition "Dura Lex, said Lex" the Law is hard but it is the law.

From the description of a story set in 1048 England, I expected a historically based fantasy novel. Instead this book could have been set at any time or place. There was little description of the town, kingdom, and country. Though "God" was mentioned a lot by the characters, and one of the characters was a monk, there was no presence of Medieval Christianity or any religious system at all. In fact I think the "saints" may have been made up. Similarly, the "black" magic lacked an origin and explanation.
The characters similarly lacked backstory and complexity. The badies were bad the goodie was good, the orphan was weak and the annoying kid was annoying, and they all wanted gold, even though there was no proof or evidence of existing gold from page one.
I'm not trying to be nit-picky, but many of the story elements that moved the plot were just stupid and went against common sense. Forexample, the Reeve/Policeman was planning on storming the house executing the occupants, and stealing their gold from day one, but he never decides to force his way in, until 3 days later when the goodguys have escaped, or when the goodguys search the house for gold they ignore the mysterious locked chests in the basement. Overall it read like a rough draft with an amusing plot and avenues for sub-plots, but nothing was ever developed and there were wholes and inconsistencies a plenty. In my opinion not worth the time and money.
One good thing: the narrator did do a good job with the material he had.