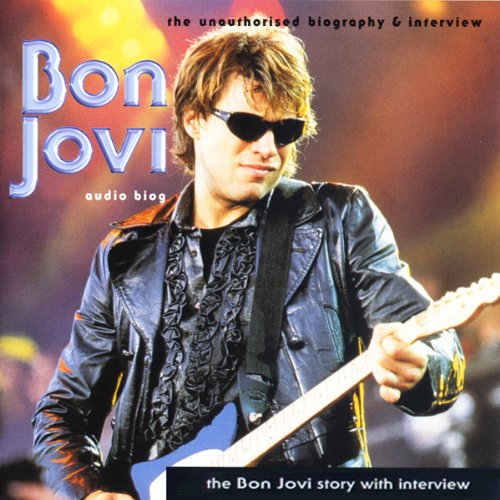 The Bon Jovi story is one of sheer determination and talent. Hard-rock band Bon Jovi was formed in New Jersey, USA, and fronted by Jon Bon Jovi. His four co members were Richie Sambora, David Bryan (Rashbaum), Ticco Tores, and Alec John Such. Jon Bon Jovi spent the years 1983 to 1988 establishing the band as one of the most popular hard-rock bands around. Success came in the form of platinum albums such as Slippery When Wet and New Jersey. Jon even managed to score success with a solo album, Blaze of Glory, and found time to become a movie star, debuting in Moonlight of Valentia in 1995 and the follow up movie The Leading Man.

This is not a music release by the artist or record company, and quality may vary. In this exclusive and unique audiobiog, Bon Jovi share the secret of their success, reveal life on the road, and talk about the image change that has kept them at the top. A must for fans, collectors, and music buffs.

What listeners say about The Bon Jovi Story

Didn't like the Rockview narration, and couldn't get into the story at all. Don't but this book. 1 2 3

I have listened to 2 books every week for 3 years and always look forward to the next Story.This download was very difficult to hear conversations thru most of the book and honestly if you are interested in having your interest in all of John Bovi destroyed this is it. The waste of money/Time and projected enjoyment is,really terrible.I have never even written a review on a single story but I was compelled to write this.If any of the creators took the time to listen to this work It would have been totally recreated.Everyone and I mean everyone and especially John Bon Jovi should be ashamed and when its said John is such a (perfectionist) well,not here.I will never again buy anything created buy anyone attatched to this really bad presentation.
My former interest in such a great musician is gone forever.
I really feel like someone thru a bunch of his work sloppily and burnt me for 25 dollars.

Would you be willing to try another one of Rockview’s performances?

Don't get other customers upset like me.Listen, decide for yourself and if you agree Please Don't Sell it

I love the band but this is the worst audio book I have ever listened too. It because of the content. When the narrator wasn’t talking and the band were talking, you can’t hear what they are saying because of too much back ground noise. I could barely hear half of the book to be able to give it a fair rating. Audio quality pretty poor.