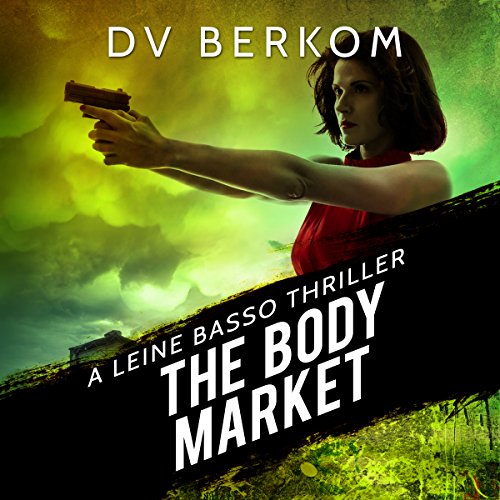 A retired assassin is called in when a celebration south of the border turns into a nightmare.

Former assassin Leine Basso is hired by a wealthy Beverly Hills power couple to find their missing daughter, Elise, last seen partying with her boyfriend at a club in Tijuana. At first, police believe the two teenagers are the victims of a carjacking. But when Leine finds their missing vehicle with the boyfriend's mutilated body inside, and the local cartel warns her away, she knows if Elise isn't already dead, she will be soon, or worse.

In the lethal world of organized crime, there's always a worse.

As Leine races to uncover the reason behind Elise Bennett's disappearance, she must also battle the powerful interests fighting to keep her from the truth.

Other audiobooks in the Leine Basso crime thriller series:

What listeners say about The Body Market

Leine Basso is pretty badass. What's not to like about a former assassin who heads to Mexico to find the missing daughter of a rich couple? Drug cartel and human trafficking situations come at the reader full force, and Berkom keeps a lively pace. Even though this is the third book in the series, it reads as a stand alone story and the reader won't feel like they have to catch up on details. Just go along and enjoy the crazy ride. I'm glad I won the Audible version of this book. I'd been dragging my feet forever on whether or not to give these books a try, but now I know what I've been missing out on and would gladly read more.

This is the second book by D.V. Berkom and Kristi Alsip that I have listened to. This story was technically the third in the series, but I consider it a standalone story. I am amazed with how thrilling this story was. Leine Basso character is intriguing. I loved how thought provoking this story was and how what seemed to be 2 separate stories were woven into one. I thought the author did a fantastic job with the closure for many of the characters. I was voluntarily provided this review copy audiobook at no charge by the author, narrator, and/or publisher.

Where does The Body Market rank among all the audiobooks you’ve listened to so far?

This book was more disappointing, developmentally and all around. Although the puzzle pieces eventually fit, it just didn't really come together in a satisfying way. Like a botched surgical procedure that leaves an ugly scar.

If you’ve listened to books by D.V. Berkom before, how does this one compare?

I've just discovered Leine Basso (I started with Book #4 this past weekend). This one fell short from my expectations and that first experience.
For a Beverly Hills power couple to not utilize every resource or demand media attentions to find their little daughter - and the lack of any emotional turmoils in her family - and it felt like the young man's death was just tossed aside ... and the bomb drop between Leine and "we hadn't talked about being exclusive" .... Idk. Too many holes or issues swept into corners.

Which character – as performed by Kristi Alsip – was your favorite?

I still think Kristi Alsip is perfect for narrating the series.

At first, it was. Then as I caught myself trying to clip to make notes, I decided I could pick it up and listen to it 'later'.

I struggled with the rating. The story is more of a 3.5, but not quite a 4. Thus the 3 in the story and 4 for overall.
The characters didn't pop out for me. Had I picked up this book first (instead of Cargo #4), I think I wouldn't have picked up another in the series. Obviously, Ms Berkom has grown as an author - as has Leine Basso.

Just gets better and better

This is the 3rd book I have listened to in this series (Leine Basso) and in my opinion they just get better and better. This book continues on from book 2 (but you don't need to have heard the previous book to be able to follow, it was just a few minutes tying up a few loose ends from the previous book).

This time Leine finds herself swapping her paid job of looking after the rich celebrities of Los Angles in order to help find missing or run away children., hoping that they haven't been sold into sex trafficking or into slavery. This leads to tangling with Mexican cartel's. Resulting in lots of guns and dead bodies.

Once again the narrator does a very good job.
I look forward to finding out what is next in store for Leine and I am sure you will enjoy it too.