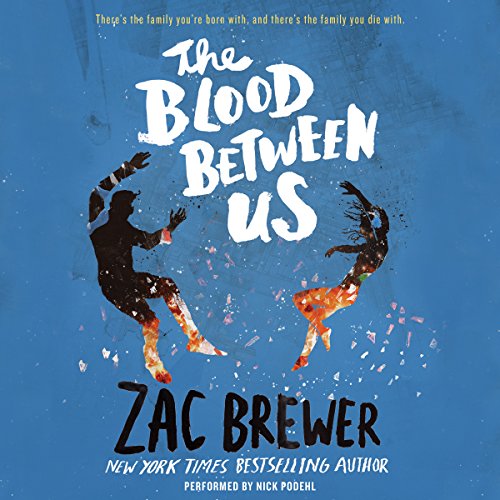 The Blood Between Us

The Blood Between Us

By: Zac Brewer
Narrated by: Nick Podehl
Free with a 30-day trial

Family secrets turn deadly in this edgy pause resister about the insidious limits of labels and the ties that bind just a little too tightly, from the New York Times best-selling author of the Chronicles of Vladimir Tod.

Growing up, Adrien and his sister, Grace, competed viciously for everything. It wasn't easy being the adopted sibling, but Adrien tried to get along; it was Grace who didn't want anything to do with him. When their scientist parents died in a terrible lab fire, there was nothing left to hold them together.

Now, after years apart, Adrien and Grace are forced to reunite at the elite boarding school where their parents were teachers. Being back around everyone he used to know makes Adrien question the person he's become, while being back around Grace makes him feel like someone he doesn't want to be.

For as much as Adrien wants to move on, someone seems determined to reopen old wounds. And when Adrien starts to suspect that Grace knows more about their parents' deaths than she let on, he realizes there are some wounds no amount of time can heal. If Adrien isn't careful, they may even kill him.

What listeners say about The Blood Between Us

Hooked till the very end

The story is really gripping. Questions ran through my head as I listened to the story. Who was behind the mystery text messages? What happened to their parents really? etc. The plot twist was timed really well but it was a little short. Then again it made sense and it was really good.

so proud of Zac!

This book is amazing and completely different than anything else Zac has created!! I haven't read a book in years but this one definitely got me back into it.