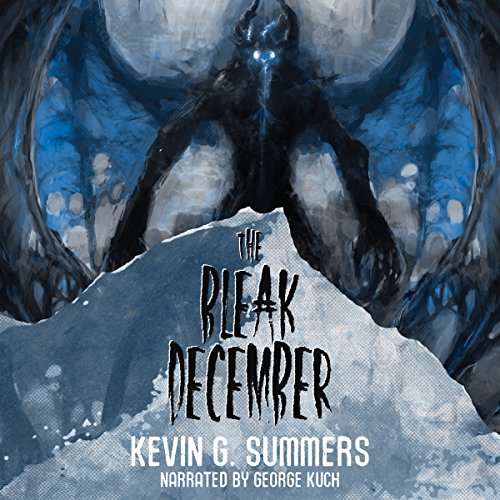 The old timers knew it was going to be a bad winter, but no one could have predicted it would be this bad. A supernatural storm has fallen on New Hampshire and a cult leader is whipping the people of the Granite State into a frenzy. Now a handful of rugged folk from the North Country are all that stand between a tyrant and his plans for dominion. Snow is piling in the Great North Woods and the dead walk among the trees. Beware the winter wasteland.

What listeners say about The Bleak December

A Small Town Tale of Survival

Where does The Bleak December rank among all the audiobooks you’ve listened to so far?

Wow! One of the best pieces of fiction I've listened to. Kevin G. Summers' writing is all encompassing, it was like reading a Stephen King novel.

What was one of the most memorable moments of The Bleak December?

I don't want to spoil it, but there was a distinct point where this amazing story with so many unique threads just came together.

No, but I really enjoyed listening to Kuch. He has an enjoyable sound, sort of like Garrison Keillor from A Prairie Home Companion. He was the perfect choice for this book. His inflection, accent, and delivery were all pitch perfect.

Only once before have I felt as bone-deep cold as I do having just finished "The Bleak December," and the book that did it to me was Dan Simmons' "The Terror", also in audio form.

The great thing about audiobooks is that you get every word the author wrote. There's no looking at the page, deciding it's all just description of some place that doesn't matter that much and skipping over it.

But if, like me, you listen to your audiobooks during your commute, you may find yourself rewinding more than usual to catch something in this one. Every time my attention wandered just a little, I found myself suddenly in the midst of a new situation or lacking some key detail. Summers writes leanly. Not as leanly as, say, David Morrell, but the focus of this book is very much on the story. And the setting. New Hampshire itself might as well be a character given how much it interacts with the other characters and services the story.

Some characters definitely distinguished themselves to me. Wes and Melody were immediate favorites. Gordon as well. The people in this story are real. Most are good, but flawed.

I thoroughly enjoyed the story, and if I didn't immediately want to dive back in and read it again, it was only because I need to warm up for a while first.

Not a bad book

I wasn't sure what to expect with this book and was glad to find that it was not bad at all. It was certainly a fast moving plot.

when I started this book I was not sure I would like it. It started off slow but then started slowly picking up speed. The emd was a bit anti climatic but a decent book. The narrarator did a great job and I think made the difference in this book. Decent book to add to your library.

interesting read, clearly influenced by game of thrones, lovectaft, and the walkng dead, the refrenced to starks, winter is coming, and the "white walkers" joke later in the book and the mass of unexpected deaths, feels like it needs an afterward or something, it ends kind of suddenly

They knew it would be a bad winter, but not bad like this, this was supernatural bad.

And only author Kevin Summers and his awesome narrator George Kuch could get me to keep on listening to something that goes from bad to worse and to worse still yet, but hey it was all to those New Englanders, Ayuh!

This really is a awesome book that keeps your interest to the very end no matter what and the audio narrator George Kuch really is wonderful, he did such a great job with all the characters and is just a talented narrator.

I have now enjoyed this story from Kevin G Summers two times and the audiobook version narrated by George Kuch is a great enrichment to be sure!

An exiting and alternative dystopian adventure in a mysterious corner of the US Northeast!

"And then it went black."

A small town in New Hampshire, Stratford Corner, already isolated and, with deep snow falling, about to become more so: Winter is coming. And so much more.
With a superbly orchestrated start, the reader is taken on a panoramic ride around the town, meeting, even if only briefly, with those who are to become players in the oncoming story so that, by the time the action really starts, we already know them, even feel a little empathy with them. They are already real people - and bad things are about to happen.

The wonderful George Kuch enhances this feeling of knowing this little town and the people living there. His warm, gently gruff voice feels so familiar, comforting: he isn't just the narrator of a story, he is telling this personally, to you. Perfectly paced, never over dramatic, each character is an individual, and his homely accent as he unfolds the terrible tale makes the reader want to hang on to every word and beg for more, more ...

And it is a scary story, feeling strange, but also somehow so possible, intriguing especially through the first two thirds of the book. However, repitition of certain aspects of remembrance of, in particular, one of the main protagonists, seperated from his wife and daughter, began to to intrude and it was the narrator's honeyed tones which carried me through to the (rather abrupt) ending.

Mr.Summers" power to draw in and involve his readers is excellent, as is his ability to bring his characters to full blooded life. Plus, the imagination behind the story itself is good so, overall, a very decent book but one which could have been even better with a little trimming in the latter part. I was gifted The Bleak December by the rights holder, via Audiobook Boom: thank you so much. I enjoyed it immensely and would recommend it to anyone, not of a nervous disposition, to wile away cold evenings. Just don't go out into the snow ...

So Not Stephen King...

No. I found it long and tedious. It was a story reminiscent of Stephen King but no where near as brilliant, entertaining/enlightening. Yes it was bleak..boy was it bleak. Back story and history don't seem to fill in the gaps till it's too late. By then I am so annoyed with not knowing why something is happening, I don't care.

Would you be willing to try another book from Kevin G. Summers? Why or why not?

Have never listened to Kuch performance before. I think he is talented.

I have never written a review so negative. I think it's because there is merit to the story but it just drags on and on with character internal monologues.The waste of potential disappoints me and makes me irritable. I used a treasured point for this so, I was determined to finish it though.