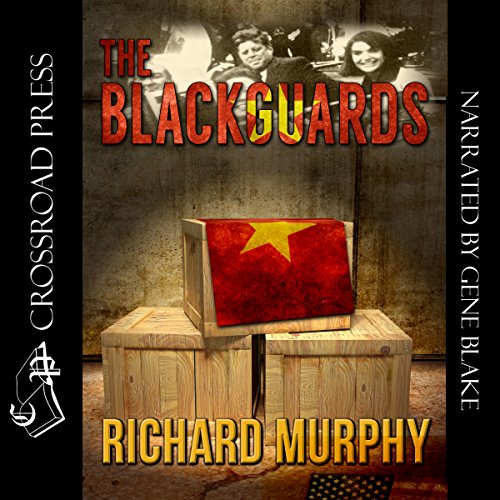 Nick O'Malley has come home from Vietnam but with more questions than answers. His unit, the 173rd Airborne, had orders to close the port of Cam Pha, which should have crippled supply lines and might have ended the war. Instead, just before Nick transferred out, the orders were cancelled. Nick later learns his entire unit was then dropped in behind enemy lines and wiped out. A mistake? Or something darker? With the help of his father and a Chicago journalist, Nick heads back in-country to try to find answers--to the fates of both his unit and the president of the United States.

The Blackguards is a story of politics and big business as Nick races to uncover the truth, facing violence and danger at every turn. The characters are tough Americans up against near-impossible odds, making The Blackguards a relevant, good-versus-evil thriller with just enough facts and reality.

Author's note: I was a sergeant in the 173rd Airborne Brigade stationed in Okinawa in 1963. We had orders from President Kennedy to close the port at Cam Pha. The Brigade, for unknown reasons, did not go, and though I survived, the entire unit was wiped out.

What listeners say about The Blackguards

This book is pretty interesting. Kept me engaged through the whole book and developed the characters nicely. However There are a few things that I did not care for.... For example in one scene the guy used a digital camera..... in the 60’s?! Um I don’t think so. Also I felt the ending was weak and kept you hanging.

As for the performance..... it was good except the female voices drove me nuts. It was awful! Sounded like kindergartens making voices up

A great thriller based on a desperate time

If you could sum up The Blackguards in three words, what would they be?

Jack was by far the more prominent so stood out

His ability to cover the wide rage of voice changes and put some excitement into his reading.

No; but there were a couple places that surprised me.

I received this book free of charge in exchange for a review.
At first I did not think the story would be much but it developed well and actually made you believe such a conspiracy was possible. I really enjoyed the story as it developed. There were a couple of technical issues like the digital cameras 30 or 40 years before their actual development but other than that the story line was fairly consistent. That such a plot could be carried out and that the bad guys could have people waiting in so many places without current surveillance technology was a bit of a stretch but still within possibility and kept the reader on edge during the whole book.

Probably not. The story continuity doesn't work. Nick is shipped home before he is deployed to Vietnam but when he goes to investigate his story he is familiar with his surroundings. Jack, who also has never been there, seems to be a local expert. Right down to knowing the language. The story is set in the 1960's but yet they use digital cameras. Really?

If you’ve listened to books by Richard Murphy and David Niall Wilson before, how does this one compare?

Would you be willing to try another one of Gene Blake’s performances?

No, it's like listening to Columbo trying to narrate a story. Terribly irritating.

Do you think The Blackguards needs a follow-up book? Why or why not?

This story had potential to be riveting but, between the poor performance and the lack of attention to detail, it falls flat on it's face.