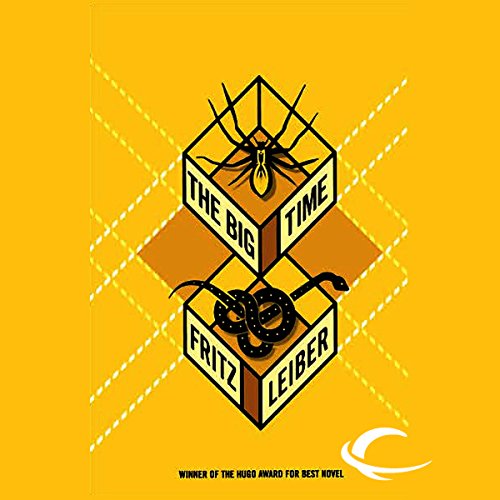 By: Fritz Leiber
Narrated by: Suzanne Toren
Try for $0.00

Have you ever worried about your memory, because it doesn't seem to recall exactly the same past from one day to the next? Have you ever thought that the whole universe might be a crazy, mixed-up dream? If you have, then you've had hints of the Change War.

It's been going on for a billion years, and it will last another billion or so. Up and down the timeline, the two sides, "Spiders" and "Snakes", battle endlessly to change the future and the past. Our lives and our memories are their battleground. And in the midst of the war is the Place, outside space and time, where Greta Forzane and the other Entertainers provide solace and R&R for tired time warriors.

Fritz Leiber was one of the most important sci-fi and fantasy writers of the 20th century. The Big Time, which won a Hugo Award for Best Novel, is his most famous SF novel.

What listeners say about The Big Time

If "Night Hawks" were outside time and space...

It's good to visit a book I read as a kid still stand up.

There's a collection of lost souls, people cut out of the timeline to fight the Change War, for ancient, unknowable generals called the Spiders, scraping for advantage over billions of years of altering history. They are colourful characters - the bright quirky, cynical people who often set a background scene - no true heroes - both the entertainers and staff of a Recuperation Station, and some soldiers come in from the cold. And then someone comes in with an atomic bomb...

It feels a lot like a stage play - most of the characters get a chance to make a big speech, and there are a lot of minor and tensions and interpersonal feuds inside the big conflict.

I like Suzanne Toren's reading of it a great deal - she has a sassy alto that sounds like Greta's voice always did in my head (except for her version of Bruce. He sounds like a scruffy Australian and, no. Just no.)

All in all, it's a great listen if you want something bright and world-weary, with no true answers at the end. And sometimes that's what I want :-)

"There's a demon inside me that always wishes to live."

What did you love best about The Big Time?

Brilliant and unique story told through dialogue like a stage play. Captures unity of place, time, and theme. Mandatory read for a true science fiction fan

What was one of the most memorable moments of The Big Time?

When a character describes her resurrection into The Big Time.

Anytime Greta (main character) describes her death during the Nazi overthrow of Chicago in the 1950s.

Essential reading, but maybe not essential listening. But if you can handle poor male voices from a female narrator, everything else is excellent.

The Big Time is a big deal!

I'll need to listen again. there's a lot going on in this story that I was foggy on. I listen while do other things. Very much enjoyed the performance.

too long to get nowhere

Lots of ideas but no finishing point. The story just fades away with no satisfactory conclusion.

The overall theme of this book, how a war between two factions altering the past to gain supremacy affects the psyches of the people fighting that war, was interesting. However, it just didn't generate a very interesting story. For much of the book, it felt more like a mystery trying to figure out who did it than a science fiction story investigating the how or why of the action. Ultimately, the story's resolution of returning everything to the status quo was disappointing.

I picked this up because Orson Scott Card recommended it. It is nothing like an OSC book. This could have been a great short story but just didn&#8217;t know when to quit.

"The Big Time" hasn't aged well. On the plus side, the novel does create suspense, and I found myself interested in aspects of the characters. But overall, the themes won't resonate much with the modern reader and the characters are a bit thin. Readable if you are a student of science fiction (it won the Hugo), but give it a pass if you are looking for a great novel.

Fun classic SF story that might not be up to the fancy standards of some but is still a good story well told.

In its time, this book was highly esteemed as an SF classic, but it has not aged well. The SF scenario is very clunky - a bit like the sets on the original "Star Trek" - the prose style is very 50s American, and the characters a bit comic-book. I have to say also that I found the storyline very confusing, and lacking in narrative drive: despite it being quite a short audiobook, it was a struggle to finish.

To cap it all, the narration was not very good; the way the main character was drawn grated somewhat, and other characters were poorly distinguished, with some fairly dreadful British accents. Sound quality was also iffy - rather muffled at times.

Unless you like this kind of old fashioned SF, I would steer clear.

What would have made The Big Time better?

Shorter. Better explained. None of those interminable speeches. And none of those characters!
As many reviewers have complained, this is a very dated book. A classic is supposed to be a work which has stood the test of time, and this simply hasn't. But it's the voice that kills it for me. Not the narrator's voice so much as the story's. How to explain?
Imagine you have a bunch of mates you meet down the pub. They are the funniest people ever, but that's because a) you know them well and b) your sense of humour is alcohol-fuelled. Now imagine listening to someone talking about another bunch of people whom you don't know, frankly wouldn't want to know, and on top of that you're sober. Four and a half hours later SHE'S STILL TALKING!

I don't know. The Big Time, the longest story in the Change War series, is a landmark work of science fiction - not the first to tackle the idea of a Time War, but in some ways the definitive one. I've read (and quite enjoyed) some of the other Change War stories, but I held off on The Big Time because I had a bad feeling about it.
I've read a lot of science fiction classics, but I've held off on one or two of them, again because I've had a bad feeling about them. One of them is Stranger in a Strange Land, which is nearly a day long. I was going to read it next just to get it under my belt, but now I'm thinking, maybe it's time to start ignoring the voices that say, "It's a must-read for any self-respecting fan of SF!"

Unfortunately this is another case of the narrator doing it too well - her voice matches the intolerably smug tone of the story.

I love time travel stories (as long as they're not written by Jodi "Tee Hee Jolly Hockey Sticks I'm So Funny" Taylor or Diana "Once More I Gazed At Jamie's Manly Chest" Gabaldon), but really didn't feel it with this one. Granted, it's about time travellers taking a rest, but still... Maybe I'll seek out Poul Anderson's take on the Time War idea, although it's not available from Audible... yet.