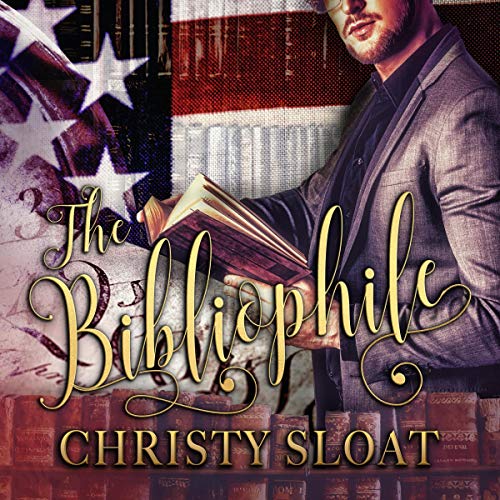 By: Christy Sloat
Narrated by: Allison Hart
Try for $0.00

As a lover of books, Adam Giordano was accustomed to getting lost in the beauty of the written word. But never quite so literally. Cracking open the pages of one unique hardcover transports him to Colonial America on the verge of war.

There, he meets a wild, Native American beauty by the name of Rose, whose life he fears is directly in the path of the brewing storm of battle. Enraptured by her, he struggles to find a way to save her from a history that may already be written.

Will Adam’s attempt at rescuing her prevent Rose from becoming the historical beacon she was meant to be?

What listeners say about The Bibliophile

Not my cup of tea.

I like the idea of grabbing a book and being able to go back in time, and I really wanted to like this story, but it just didn’t do it for it. Honestly, I was bored the majority of the time so it took me long to finish listening to it. I hadn’t listened to or read the previous books in this series either. Overall, I didn’t feel “it” with any of the characters so I didn’t care what happened to them.

It took me a while to figure out why the narrator spoke in that stilted, robotic way for Rose but then sounded better for Adam and everyone else. I get the narrator was doing a Native American accent but, please, tell me I wasn’t the only one annoyed by it? I've heard plenty of Native Americans speak but something about the way she did it here... I don't know. I didn’t like Rose’s overly soft voice either because it sounded unnatural.

When it comes to a narrator adding sounds to a story, it really depends on the story and what’s going on during the “sounds” scene. In this case, the sounds (like coughing, laughing) were fine, it was the overly emotional aspect from some of the characters that somewhat grated on my nerves.

I didn’t understand the order at the beginning. There was the About the Author, a snippet of the story (where I thought I was listening to the actual story), then Notes. Who thought that was a good idea?

I think the funniest part was when the listener learns that Adam got his shampoo at Ulta. Was I the only one surprised that a straight, single, cis man would buy shampoo at a makeup store? I am? Okay…

Was Mrs. Winthrop a Native American? Originally I thought she was since she was friends with Rose and her son was Native American, but there was a part when she was talking to Adam, I think, and she made mention of how her husband trades with “savages.”

I wasn’t a fan of Angela. I don’t know how old she was but she was too youthful-sounding for my liking. Like had I just heard the voice done for her, I would have assumed it was an older teenaged girl. When she answered the phone the first time Adam called her… What was wrong with her? “Who the hell is this?” Was that how she usually answered the phone after someone asked for her? It just seemed strange.

So the guy who discovered the time-traveling had originally written a formula in a book; hence, he ends up time traveling. What kind of formula was it though? I just didn’t find that part believable at all.

Anyway, the Librarians' goal is to go back in time, record what correctly happened, then what? So they’d go back in time, realize a famous person hadn’t been given credit for something and it would appear in their book, then send the books off to some unknown library that only the Librarians could go to? The whole idea there doesn’t make sense to me. What had Rose’s book originally said if she hadn’t been credited for saving a bunch of Native American girls? Why would she have had a book period? And how would the Librarians know when someone wasn’t credited with something?

How had Adam’s mom known he had “the gift” when he was a baby? It said she saw a spark in his eyes? Really? What kind of spark was it considering he would be the second male to time-travel?

If it was only the females in the family and one female at a time who could time travel, did that mean if they had a daughter, the daughter would have to wait until her mother died?

So Adam’s father had been abusive to Adam’s mother and not the friendliest to Adam. When Adam went to the past and spoke with his mother, she admits all this but continued to stay with her husband. But why? And…she wants Adam to love his father. Right. You know it’s best to keep negative/toxic people in your life.

The first sex scene was so questionable. “He splayed his hand on my bottom while the other hand caressed “my area.” Her area? Seriously? That was too funny that I had to rewind to confirm I’d heard that correctly. That’s the first time I’ve ever heard an author refer to a female’s genital region as her area while the character was getting intimate. I also found it strange that instead of touching her boob or even making out with Rose, Adam went right to “her area” and was ready for sex. But “I don’t want you to think this is all I want.” Sure, Adam, especially when you don’t really know Rose.

For someone who’s into books, I found it strange that Adam hadn’t known what a “snare” was until he went looking for one.

I received a free audiobook code in exchange for an honest review.

As someone who had not read or listened to the earlier Librarian Chronicles, I came into this volume with few preconceptions. The author admits that most of her earlier work was geared towards younger readers/listeners, and I think this rather simplified approach to storytelling is what kept me from loving it. I never felt that I got to know either Adam or Rose very well, and I never grew to love/care deeply about either one of them. That said, it was an interesting snapshot of Native American involvement in the American Revolution. I received a complimentary copy of this audiobook.

Another wonderful book from Christy!!

I have so enjoyed this book! The author is so talented. The primos of these book is fantastic. I think I'll go back and listen to the other 2. Give it a read!! You will not be disappointed!!! Thanks Christy for the audio format!!!
Teri.

I hope there is a sequel

This book has a lot of good story ideas but it feels like it stopped halfway through and didn't really go any further. Like when a series on TV is suddenly cancelled and the rest of the season is running around like a headless chicken trying to finish as much as possible, but it all just seems rushed and unloved.
I really hope there is a sequel to complete it, I enjoyed the characters and the plot, it would be a shame if its just left there.