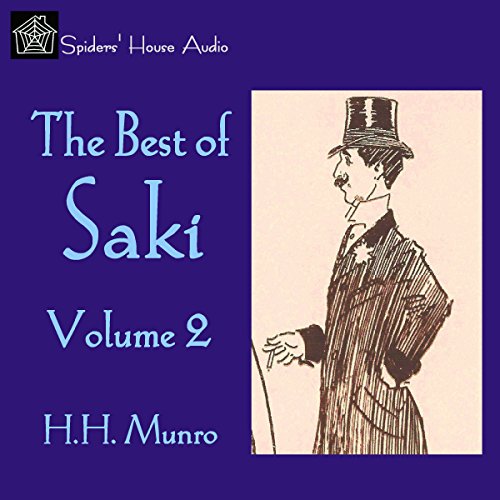 The Best of Saki, Volume 2

The delicious, biting wit of Saki's short stories satirizing Edwardian high society are some of the funniest and most delightful of exquisite literary miniatures. In this second volume, there are 22 glittering examples.

Saki was the pen name of Hector Hugh Munro. He was born in Burma in 1870, where his father was a senior official in the Burma police. From the age of two, he lived with two maiden aunts and his grandmother in Devon and was educated in Exmouth and at the Bedford Grammar School. Later he travelled in Europe with his father. He joined the Burma police but resigned after a year because of ill health and returned to England, where he began his writing career as a journalist and short story writer for magazines and newspapers. Saki is regarded as a master of the short story.

At the start of the First World War, he refused a commission, enlisted as a private, and went to France where, in November 1916, he was killed by a shot to the head, his last words being "put that bloody cigarette out".

What listeners say about The Best of Saki, Volume 2