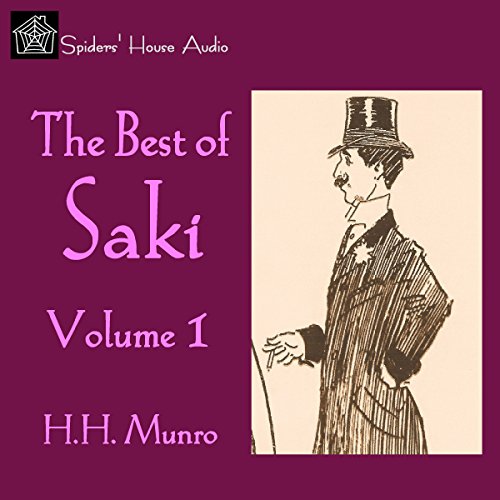 The Best of Saki - Volume 1

The delicious, biting wit of Saki's short stories satirizing Edwardian high society are some of the funniest and most delightful exquisite literary miniatures. In this first volume, there are 22 glittering examples.

Saki was the pen name of Hector Hugh Monro. He was born in Burma in 1870, where his father was a senior official in the Burma police. From the age of two, he lived with two maiden aunts and his grandmother in Devon and was educated in Exmouth and at the Bedford Grammar School. Later he traveled in Europe with his father. He joined the Burma police but resigned after a year because of ill health and returned to England, where he began his writing career as a journalist and short story writer for magazines and newspapers. Saki is regarded as a master of the short story.

At the start of the First World War, he refused a commission, enlisted as a private, and went to France, where, in November 1916, he was killed by a shot to the head, his last words being, "Put that bloody cigarette out."

What listeners say about The Best of Saki - Volume 1

I wished I had known which stories were in this volume, so, assuming others might wish that, here are the titles--21 not 22:
The Open Window; The Story-Teller; Mrs. Packletide's Tiger;The Penance; Sredni Vashtar; Adrian; The Mappined Life; Reginald; The Chaplet; The Reticence of Lady Anne; The Unrest-Cure; The Phantom Luncheon; The Remoulding of Groby Lington; Gabriel-Ernest; Laura; Clovis on Parental Responsibilities; The Feast of Nemesis; Reginald on Besetting Sins; Tea; The Lumber-Room; A Young Turkish Catastrophe.

I debated long and hard whether to buy this volume, not knowing the included titles, but since the sample started with The Unrest-Cure, I knew there was at least one of my favorites.

Pleasant voice with just enough subtle irony to do justice to this narvelous s malicious author.

could not make a connection to this story or narrator
:(. fell asleep listening. could not tell you anything about the story.

Not one for me

Taki may have been incredibly clever but this came across as a bit like Jeeves and Wooster meet Harry Potter - which I still don't understand to this day.