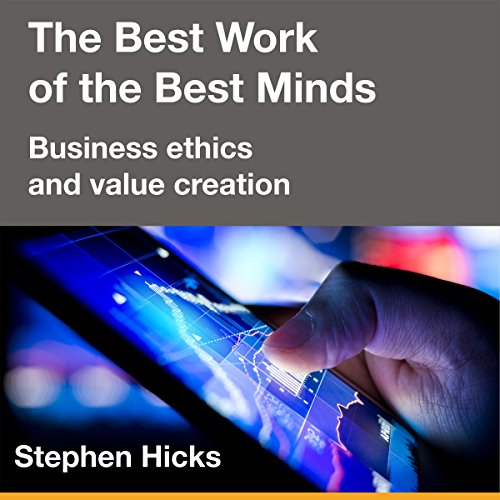 The Best Work of the Best Minds

The Best Work of the Best Minds

Philosophy professor and entrepreneur Stephen Hicks takes a critical look at unquestioned assumptions in the arena of business ethics.

Excerpt from The Best Work of the Best Minds: Business Ethics and Value Creation:

"In the eyes of many a cloud of suspicion hangs over business.

The reason is that the moral tradition out of which the competence ethic of business arises conflicts with a competing moral tradition that holds business to be immoral or, at best, amoral. For those who subscribe to this latter moral tradition, ethics is felt to be more a matter of stoically doing one's duty rather than having fun, of fulfilling one's obligations rather than fulfilling yourself, of obeying the rules rather than doing what's practical, of giving away rather than creating. Stooping to stereotypes, if this tradition's view of ethics could be personified, she would appear as a matron who goes about sniffing disapprovingly at anyone who seems to be having a good time. Having a good time means self-indulgence - but, she would declare, we are not here to have a good time; we are here to serve others, to be stewards for future generations, to be nice, to take up as little space in the world as possible. Above all, she would continue, we are here to sacrifice selflessly - to society as a whole, to God, for the greatest happiness of the greatest number, to Duty, to the working class, to the ecosystem."