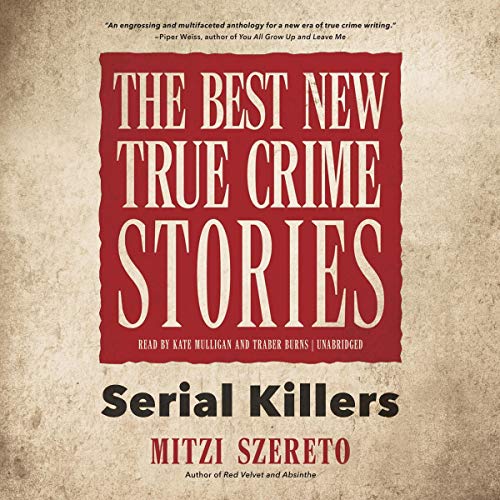 By: Mitzi Szereto
Narrated by: Kate Mulligan,Traber Burns
Try for $0.00

A serial killer - your neighbor, friend, even your spouse?

Serial killers: Ted Bundy, John Wayne Gacy, and Jeffrey Dahmer are often the first names that spring to mind. Many people assume serial killers are primarily an American phenomenon that came about in the latter part of the 20th century. But such assumptions are far from the truth. Serial killers have been around for a very long time and can be found in every corner of the globe - and they're not just limited to the male gender either. Some of these predators have been caught and brought to justice whereas others have never been found, let alone identified. Serial killers can be anywhere. And scarier still, they can be anyone.

If you are a fan of true crime books such as I'll Be Gone in the Dark, Mindhunter, The Devil in the White City, or Peter Vronsky's Sons of Cain; you will want to listen to Mitzi Szereto's The Best New True Crime Stories: Serial Killers. This book will leave you wondering if it's ever really possible to know who's behind the mask you're allowed to see.

What listeners say about The Best New True Crime Stories

ok not great, readers could be for animated when changing speakers. it was average. average

While the book itself was absolutely fascinating, the narrators about put me to sleep. Both Mulligan and Burns sound like the auto-reader capability on an iPhone.

I couldn't keep listening past the first two chapters. It felt like I was listening to robots read.

I’m glad that I did not follow bad reviews. I liked the stories and the naration. Just give it a try!

A whole lot of nothing!

Very hard to follow and cases were all all over the place. Not very engaging at all.

Overall, this was a decent read. It suffers from inconsistent writing quality. Some of the sections were meandering and didn’t seem to maintain a narrative thread. Others were just fine. The narration was good, but nothing special.

This was a super interesting collection of true crime books. A lot of them I had not heard of before. The performances were good as well. Good for a true crime lover.

Glad I didn’t listen to the negative reviews

The subject matter is not pleasant and in fact very horrifying. The narrators are very matter of fact and have the perfect “crime story” voices that works well for the geńre I highly recommend this group of True Crime stories an the perfect narrators

Multiple stories about serial killers around the world. l enjoyed the diversity of the authors and styles. All stories are well written. Nicely done!

These crime stories range from extremely boring to mildly interesting. There is so much well-written material on this subject that this audiobook is better skipped.

An interesting and different approach

This book presents cases in a new and different way to many anthologies. Different authors bring different styles and approaches. I think it works well. It is also an interesting mix of cases as it covers many different countries and eras. True crime fans will be fascinated.