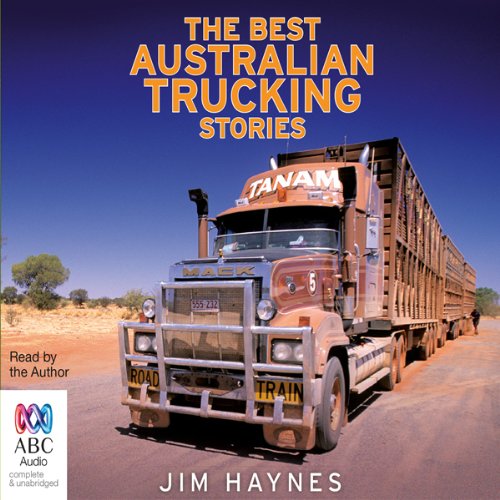 The trucker's job - so vital to our nation's everyday life - makes for a diverse treasure trove of stories. This first-ever collection of stories about Aussie truckers captures the humour, tragedy, and fascinating history of their world, proving once again that truth is often stranger, funnier, and more inspiring than fiction. The unlikely yarns and tales, collected by Jim Haynes, quickly transport the listener into the intriguing but often hard and lonely world of the long-distance truck driver. There are stories of endurance while crossing the Nullarbor in the early 1950s, of rescuing mates stranded in the desert and dumping wheat in protest at Parliament House, of repossessing vehicles in suburban Adelaide, and of men imprisoned during the long political battle to make the roads of Australia free to carry freight.

Steeped in larrikinism, these are salt-of-the-earth Aussie voices from the most genuine characters to ever spin a yarn. Whether you're interested in one of the most significant social revolutions to have shaped our nation, or in these never-say-die modern pioneers who astound with their resourcefulness, or whether you're just after a laugh and a bloody good story, this book is for you.

What listeners say about The Best Australian Trucking Stories

bit of slim over kill

mostly historical. 1 or 2 chapters of good laughs. rest was history. was after laughs.

Enjoyed this book as we crossed the Nullabor and increased our respect for truckers. We already hold them in high regard.

This book had me laughing...it also had me crying. A great collection of Aussie stories. Perfect road trip material!

interesting storys and a bit of a laugh 👍

its funny how so much can change in an industry but the same struggles and bull just keep popping up 😂🚛💨, good to hear story from all different times from first trucks to current, some laughs an some tears but reminds me why I love what I do.

Actually got disappointed that it finished.

I'm a truckee , Listened to the book while driving. Was disappointed that it ended hahaha.