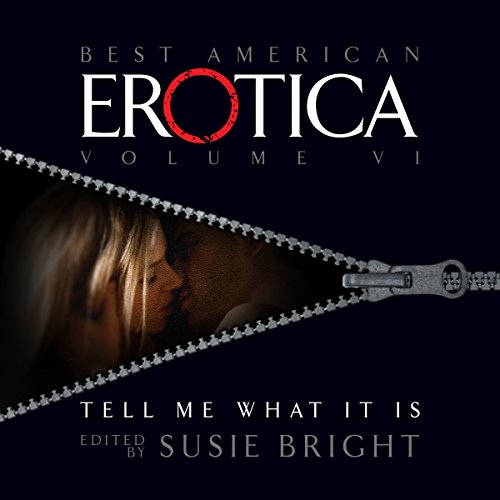 The Best American Erotica, Volume 6: Tell Me What It Is

The San Francisco Chronicle describes Bright as "the X-rated intellectual" and The New York Times hails her as "the voice of sweet reason and literacy." This sixth annual edition of a best-selling series is sure to satisfy old fans and leave newcomers begging for more.

Included in this collection:

"[Susie Bright is] the avatar of American erotica." (The New York Times)

What listeners say about The Best American Erotica, Volume 6: Tell Me What It Is

And I was pleasantly surprised at how many I actually enjoyed. I like stories that mix genres, so it's understandable I liked the ghost story. But the film noir story was a more unexpected pleasure since it mixed the hard boiled crime story I like with a gay storyline I generally don't.

In most cases I don't purchase abridged or partial audio book so picking one marked as "unabridged selections" was a first. But after listening to the whole thing, I think selecting specific stories for the audio version was a great idea. I may have to sample some more of the "Best American Erotica" series.

A little bit of erotica

These stories were all short and over within a few minutes. The majority were good and often very steamy. The prologue at the start by the editor was somewhat annoying but that had more to do with her American twang than what she was saying. However, she did forwarn that the mix of stories included all sorts of erotica and it was simply that, but there were only a few that I skipped over. This was either because they were not interesting to me or not my cup of tea, but on the whole enjoyable to listen to.