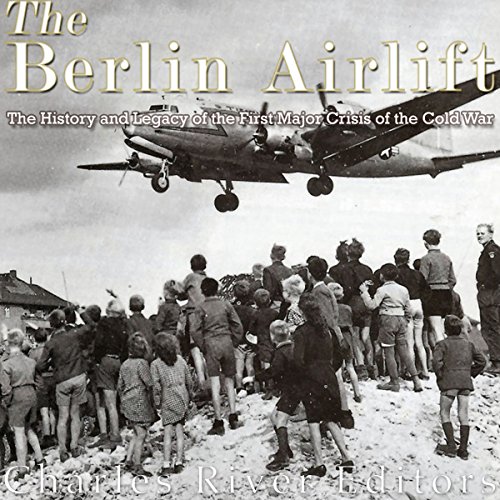 The History and Legacy of the First Major Crisis of the Cold War
By: Charles River Editors
Narrated by: Colin Fluxman
Length: 1 hr and 36 mins
Categories: History, 20th Century
4.5 out of 5 stars 4.3 (3 ratings)

In the wake of World War II, the European continent was devastated, and the conflict left the Soviet Union and the United States as uncontested superpowers. This ushered in over 45 years of the Cold War, and a political alignment of Western democracies against the Communist Soviet bloc that produced conflicts pitting allies on each sides fighting, even as the American and Soviet militaries never engaged each other. Though it never got "hot" between the two superpowers, the Cold War was a tense era until the dissolution of the USSR, and nothing symbolized the split more than the division of Berlin. Berlin had been a flashpoint even before World War II ended, and the city was occupied by the different Allies even as the close of the war turned them into adversaries.

If anyone wondered whether the Cold War would dominate geopolitics, any hopes that it wouldn't were dashed by the Soviets' blockade of West Berlin in April 1948, ostensibly to protest the currency being used in West Berlin but unquestionably aiming to extend their control over Germany's capital. By cutting off all access via roads, rail, and water, the Soviets hoped to force the Allies out, and at the same time, Stalin's action would force a tense showdown that would test their mettle.

In response to the blockade, the British, Americans, Canadians, and other Allies had no choice but to either acquiesce or break the blockade by air, hoping (correctly) that the Soviets wouldn't dare shoot down planes being used strictly for civilian purposes. Over the course of the next year, over 200,000 flights were made to bring millions of tons of crucial supplies to West Berlin, with the Allies maintaining a pace of landing a plane in West Berlin every 30 seconds at the height of the Airlift.

As the success of the Berlin Airlift became clear, the Soviets realized the blockade was ineffective, and both sides were able to save face by negotiating an end to the blockade in April 1949, with the Soviets ending it officially on May 12. The Airlift would technically continue until September, but for all intents and purposes, the first crisis of the Cold War had come to an end, and most importantly, the confrontation remained "cold."

For the next decade, West Berlin remained a haven for highly-educated East Germans who wanted freedom and a better life in the West, and this "brain drain" was threatening the survival of the East German economy. In order to stop this, access to the West through West Berlin had to be cut off, so in August 1961, Soviet premier Nikita Khrushchev authorized East German leader Walter Ulbricht to begin construction of what would become known as the Berlin Wall. The wall, begun on Sunday August 13, would eventually surround the city, in spite of global condemnation, and the Berlin Wall itself would become the symbol for Communist repression in the Eastern Bloc.

A Very Good Concise History of The Airlift

This audiobook is a compact, concise history of the Berlin Airlift of the late 1940's. The Berlin Airlift is a very good example of a "battle" of the "Cold War" fought between the Soviet Union and The Western Democracies. This narration is very good. I received the Kindle for free and purchased the accompanying audiobook for a small fee. While the audiobook is very good, the free Kindle was better. There are maps, photographs, and additional narrative. In that the Kindle was free I am very glad that I received both. Thank You....