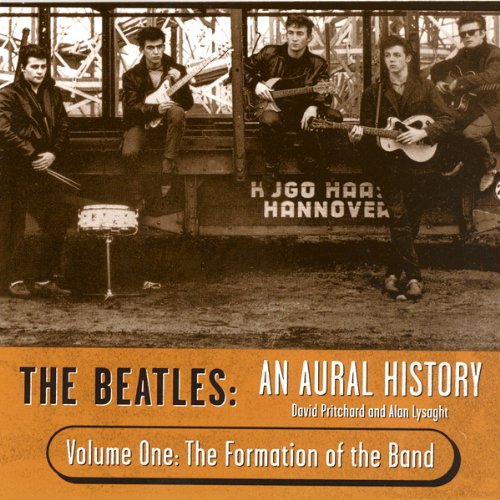 By: Alan Lysaght
Narrated by: David Pritchard
Try for $0.00

Based on the award-winning radio documentary heard around the world, and drawing on 30 years worth of exclusive and rare interviews, The Beatles, An Aural History is the first chapter of a three-part series. This is not just another Beatles' history; this is The Beatles story like you've never heard it before. These are the voices of the band, their family members, friends, and colleagues who participated in the events that were pivotal in forming Rock 'n' Roll's most important band.

John Lennon's former school headmaster recalls his pupil's first band and the trouble they caused. The Cavern Club's disc jockey recounts the dawn of Beatlemania in Britain. Picture these young men experimenting with what would become their signature hairstyle, as described by photographer Astrid Kirchherr. Revolver cover artist Klaus Voorman describes the thunder that rocked the Kaiserkeller in the heart of Hamburg's seedy red-light district. Back in Liverpool at 10 Mathew St., a regular patron describes the throng of sweating enthusiasts packed into the Cavern Club.

These are the sights, sounds and sensations of history in the making. The familiarity, the excitement and the surprises that accompanied these lads from Liverpool to Hamburg and back again is yours to experience. Witness the birth of the original rock 'n' roll legend.

What listeners say about The Beatles

In My Life: Voices from the Beatles' Liverpool & Hamburg

This is a nice little audio documentary on the Beatles' early lives. The authors explain that they had collected a number of interviews over the years and they wanted to produce this series so we could actually hear the voices of Beatles' siblings, the Quarrybank headmaster, Pete Best and his mom Mona, Stuart Sutcliffe's mom, the Hamburg art students, among others. They also managed to capture interviews with George Harrison and Yoko Ono.

Yoko Ono talks about John fishing in Scotland. There are a number of small anecdotes like that, which add up to a fun chronological run through the early years.

The authors (or is it author?) mention a series. This is the only installment on Audible. I would like to hear others. But I hope they get rid of the background new agey muzak. I am guessing they put it in to tie together the various audio segments conducted over a number of years on different equipment. I have no idea. That is my guess. Though the audio does sound clean. I would just say ditch the muzak loop.

A delight, with many surprises

The story is so widely reported and so well known, you may believe there's nothing more to learn. You'll be pleased with the scope of this tantalizing excerpt, and impatiently waiting for the other volumes of the production. Some of us will be sharing this with our kids, and grandkids...

nothing insightful and pretty short for the price you pay. but good idea to make it an aural history for my train ride.