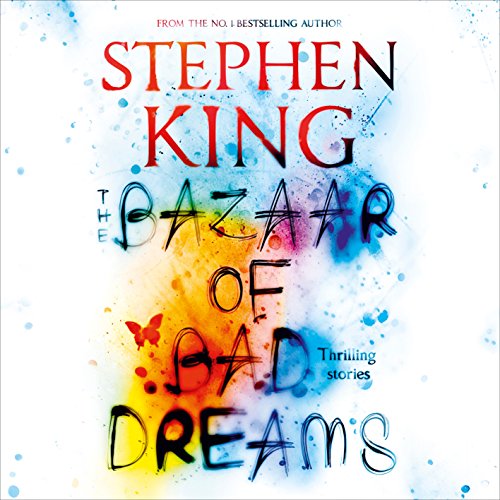 The Bazaar of Bad Dreams

The short story 'Obits' won the 2016 Edgar for best short story. Featuring introductions to each story, read by Stephen King.

A thrilling collection of 21 stories - some brand new, some published in magazines, all entirely brilliant and assembled in one collection for the first time - with a wonderful bonus: in addition to his introduction to the whole collection, King gives listeners a fascinating introduction to each story with autobiographical comments on their origins and motivations.

The number one best-selling writer has dazzled listeners with his genius as a writer of novellas and short story fiction since his first collection Night Shift was published. He describes the nature of the form in his introduction to the work: 'There's something to be said for a shorter, more intense experience. It can be invigorating, sometimes even shocking, like...a beautiful curio for sale laid out on a cheap blanket at a street bazaar.'

In The Bazaar of Bad Dreams there is a curio for every reader - a man who keeps reliving the same life, repeating the same mistakes over and over again, a columnist who kills people by writing their obituaries, a poignant tale about the end of the human race and a firework competition between neighbours which reaches an explosive climax. There are also intriguing connections between the stories; themes of morality, guilt, the afterlife and what we would do differently if we could see into the future or correct the mistakes of the past. Effervescent yet poignant, juxtaposing the everyday against the unexpected, these stories comprise one of King's finest gifts to his constant listener as well as to those fascinated by the autobiographical insights in his celebrated nonfiction title On Writing. 'I made them especially for you,' says King. 'Feel free to examine them, but please be carefuly. The best of them have teeth.'

What listeners say about The Bazaar of Bad Dreams

Would you recommend The Bazaar of Bad Dreams to your friends? Why or why not?

Narrators. They all added to the stories. They were generally well picked.

I enjoyed the book.

Not just for horror/fantasy readers

I have read a fair bit of Stephen King, but always prefer his more "mainstream" work; away from fantasy and horror. I also particularly enjoy his short stories; a form of which he is a master. I think this is some of his best stuff for a while, although much of it is not recent output.

Clearly there is a lot of supernatural in this collection, but by no means in all, and his gift for great story-telling and characterisation shines through much more than is the norm with most of his work. I really enjoyed these stories. OK, the baseball one left me completely cold because I had no idea what was going on, but apart from that, they are great tales, very well told.

The Bazaar Of Bad Dreams review

If you could sum up The Bazaar of Bad Dreams in three words, what would they be?

What other book might you compare The Bazaar of Bad Dreams to, and why?

Skeleton crew, Because I think its similar

I found the book scary

The narrator is very easy to listen to.

A few gems but not many

I'm a big Steven King fan but this is not his best work. A couple of good stories but not many.

great tales,each one different to the next

loved it and excellent narration plus really enjoyed the Stephen King intros before each one. excellent

Stephen King at his best. I loved that he introduced the stories in his own voice. The book also gives insight into his life.

some better than others. many ended abruptly. will only remember a few of them. not so much horror in these ones as unusual events in people's lives

That 'bout says it. If you like Mr King then you'll like this.
One of the best popular fiction writers, well crafted, original stories with well constructed sympathetic (!) characters.
Always interesting and here a great diversity of style and genre in these short stories.

Brilliant story's to keep you on the edge of your seat .loved all of them

Beautifully read pieces of work from the masterful Stephen King: voices well chosen to match - and illustrate - the stories. The one thing which really jarred? A beautifully heartbreaking story - The Sound of Thunder - didn't even get a few second's grace at the end of the tale before the Audible voice announced it was the end of the book. It really ruined the story. Please grant the listener a few more seconds to process the whole story before they come to the end of the audiobook!!

tales of the macabre

Mix of narrators was good. The Intros from King was a nice touch. King's work is odd, I don't quite enjoy the stories because of the dark and sometimes twisted themes but it intrigues. it compells me to keep listening. How does he do that???

An interesting assortment of stories. Some I enjoyed more than others, some got me thinking more than others, and I guess that's the case with any compilation of tales. Overall I enjoyed this book, but calling it a Bazaar was a wise choice - its an ecclectic mix which covers the full spectrum of topics and characters that King does so well. Recommended for fans of King's style, but don't expect stock standard horror a la The Shining or It.

I really enjoyed that each tale was narrated by a different voice actor. It broke them up into individual entities and gave each story more character unto itself.

You never want this to end

What a collection. It’s like sitting down to your favourite meal that never ends.

Wonderful writing, amazing stories. So many characters to get to know.

Maybe not for me

I didn't enjoy this as much as I hoped I would. Maybe short stories just aren't for me; I often finished wanting to know more.. Which I realise is probably the point. Some of the more "human element" stories were great, but not what I'm used to with SK so I felt a little bored in places waiting for the "action". Majority of narrators were brilliant (always enjoy Fontana) but a couple I just couldn't listen to - one being drunken fireworks. I struggled to get to the end, and found myself wanting it to end. Not my favourite, but some quality and thought provoking stories in here nonetheless.

perfect for those who commute. The weekly drive up and down the Hume Freeway is made much more bearable with this, and the stories are very good. Nice touch of horror and suspense.

As always King has provided a quality product.

Very Stephen King-y. loved the story intros by the man himself. Audio production was top shelf.

Drunken Fireworks, what a superb story and brilliantly read, worth it just for that. A great insight into a legend author.

Fantastic mix of stories and narrators with an introduction to each story by Stephen King.

Riverting from go to woe

Every story is read to perfection, and each one as good as the last. Steven King is still the master and I loved hearing his voice in between each story giving us the story behind the story. I really like hearing him also read one of his own. A true literary Master.

a wonderful group of stories

I Love the final story...it was a great painted picture of the end of the world.