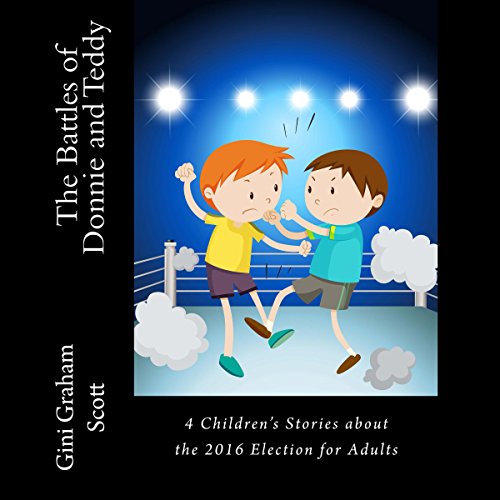 The Battles of Donnie and Teddy

By: Gini Graham Scott
Narrated by: Coulter Evans
Try for $0.00

The Battles Of Donnie And Teddy was inspired by watching the Republican Party debates, and especially the knock-down, drag-out fight between Donald Trump and Ted Cruz. They are like two little boys fighting in a schoolyard or playground over their toys and who is the best. They hurl insults, call each other names, and try to humiliate one another and his family members.

Meanwhile, as the fight goes on, the Republican Party is appalled, as are many national leaders, who have expressed concern that the level of personal attacks are not befitting a Presidential candidate, much less a President, and are dragging down the reputation of the US into the mud. So I have written this book in that spirit - featuring Trump and Cruz as two little kids fighting - and then fighting some more. The book features four stories of two kids fighting - in the sandbox, at a birthday party, at the lake, and at the playground.

What listeners say about The Battles of Donnie and Teddy

Would you listen to The Battles of Donnie and Teddy again? Why?

Absolutely. I think Gini Graham Scott did a wonderful job of capturing the essence of the contentious battles between these two candidates. Not only that, the stories were hilarious, and had me chuckling, especially after seeing both candidates verbally spar with eachother during the numerous debates and campaign appearances. Great job Gini

It really helped point out just how ridiculous and ridiculously entertaining this election cycle has been.

What does Coulter Evans bring to the story that you wouldn’t experience if you just read the book?

Soothing rich voice. Coulter's inflections and pace were both exactly what was needed to bring this laugh-out-loud story to life

If you could take any character from The Battles of Donnie and Teddy out to dinner, who would it be and why?

Donnie, of course. He seems to be the top dog if you will. I'd love to find out what makes him tick...and see if he's just a big bully, or somebody who truly commands respect. My guess is that he's a bully!

I have read some of Gini's other books and writings (Huffington Post) and find that she's really tapped into what a lot of regular citizens are thinking. I hope to see/read more from her in the weeks and months ahead as we near the Republican National Convention.