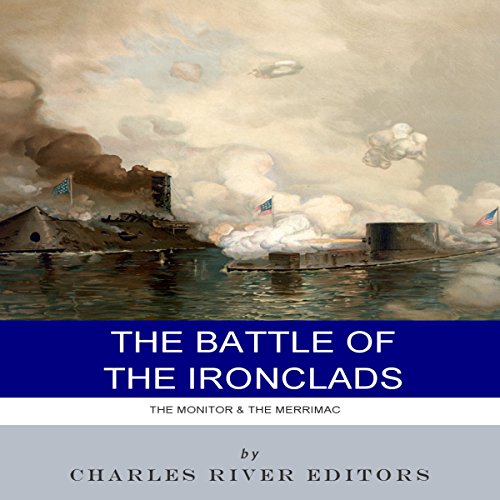 The Battle of the Ironclads

"We of the Monitor think, and still think, that we had gained a great victory. This the Confederates have denied." (S. Dana Greene)

On March 8, 1862, the newest era of naval warfare began. That day the CSS Virginia, an ironclad created out of the hull of the scuttled USS Merrimac by the Confederates, sailed down the Elizabeth River to Hampton Roads, where a Union blockade fleet was anchored. The wooden ships of the North were no match for the ironclad, which quickly rammed and sank the USS Cumberland, and as it trained its sights on the USS Congress, one Union officer noted the former Merrimac fired "shot and shell into her with terrific effect, while the shot from the Congress glanced from her iron-plated sloping sides, without doing any apparent injury."

The Merrimac had overwhelmingly demonstrated the superiority of the ironclad over the traditional frigates and gunships of the time, but it met its match the following day. On March 9, the North's ironclad, the USS Monitor, arrived to challenge the Confederate ironclad. Though they were both outfitted with iron, the two ships had important differences. The Merrimac had more guns than the Monitor but was slower and more difficult to maneuver. The Monitor, however, did not have the size and power. Lieutenant S. Dana Greene described the initial shots in the battle of the ironclads: "The turrets and other parts of the ship were heavily struck, but the shots did not penetrate; the tower was intact, and it continued to revolve. A look of confidence passed over the men's faces, and we believed the Merrimac would not repeat the work she had accomplished the day before." The two ironclads would fight to a standstill on that day, but naval warfare would never be the same.

What listeners say about The Battle of the Ironclads

As a thesis it probably rates a C, if Publish or Perish not even that. The material is good, especially since they shared only one battle which each declared victory but never really fought again and each vessel began and sank within the year 1862. Much quoting from records and correspondence, sometimes the same material twice. The importance of the development of the ironclad ships and their role in future shipbuilding is only hinted at.
The audio is narrated by Joseph Chialastri