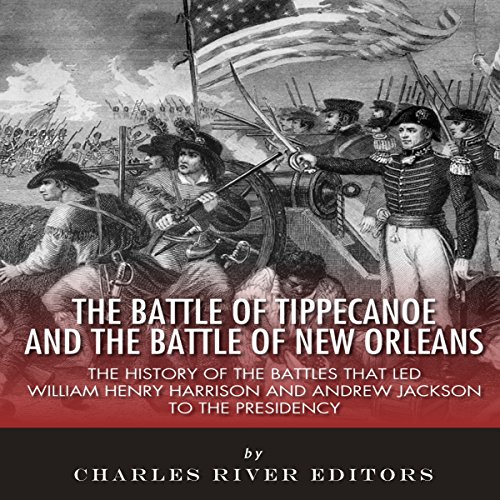 The History of the Battles that Led William Henry Harrison and Andrew Jackson to the Presidency
By: Charles River Editors
Narrated by: Rhett Samuel Price
Length: 3 hrs and 12 mins
Categories: History, American
3.5 out of 5 stars 3.7 (7 ratings)

The Battle of Tippecanoe, fought on November 7, 1811 near present-day Lafayette, Indiana, involved forces of fewer than 2,000 Native American warriors and white soldiers, and only about 300 men were killed or wounded on both sides. Given those numbers, it's apparent that the battle was far from being a Saratoga or a Gettysburg in terms of its scale or significance as an historical turning point, yet it was one of the most important battles in shaping American history during the early 19th century. The battle also involved an epic confrontation between two important American figures: William Henry Harrison, who would become the ninth president of the United States by running on his success in the battle, and the Shawnee war chief Tecumseh, arguably the most famous Native American leader in American history.

The initial Native American attack struck the southern point of Harrison's defensive perimeter around 4:30 am on November 7, 1811, and almost immediately the warriors rushed in among the American defenders manning that sector. Soldiers defending the southern side of the perimeter suffered the highest casualties, with the Yellow Jackets suffering a 30% casualty rate, but in fighting lasting about two hours Harrison's force of roughly 1,000, suffered only 62 dead and about 120 wounded. As the sun rose, the warriors began running low on ammunition, and the light revealed their small numbers, leading them to break off the attack and retreat towards Prophetstown.

The battle was hardly a decisive victory, but at the end of the fighting the Americans still held their perimeter, allowing them to claim victory.