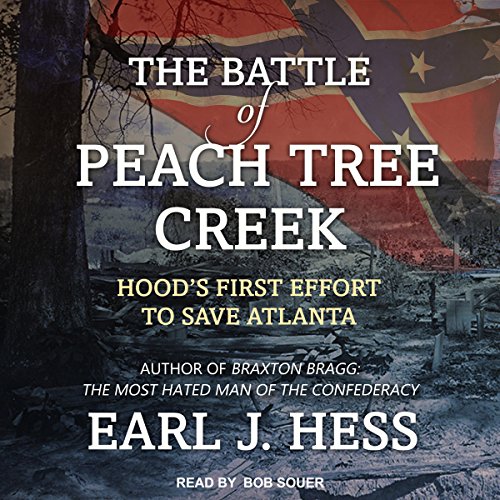 The Battle of Peach Tree Creek

On July 20, 1864, the Civil War struggle for Atlanta reached a pivotal moment. As William T. Sherman's Union forces came ever nearer the city, the defending Confederate Army of Tennessee replaced its commanding general, removing Joseph E. Johnston and elevating John Bell Hood. This decision stunned and demoralized Confederate troops just when Hood was compelled to take the offensive against the approaching Federals.

Attacking northward from Atlanta's defenses, Hood's men struck George H. Thomas's Army of the Cumberland just after it crossed Peach Tree Creek on July 20. Initially taken by surprise, the Federals fought back with spirit and nullified all the advantages the Confederates first enjoyed. As a result, the Federals achieved a remarkable defensive victory.

Offering new interpretations of the battle's place within the Atlanta campaign, Earl J. Hess describes how several Confederate regiments and brigades made a pretense of advancing but then stopped partway to the objective and took cover for the rest of the afternoon on July 20. Hess shows that morale played an unusually important role in determining the outcome at Peach Tree Creek - a soured mood among the Confederates and overwhelming confidence among the Federals spelled disaster for one side and victory for the other.

What listeners say about The Battle of Peach Tree Creek