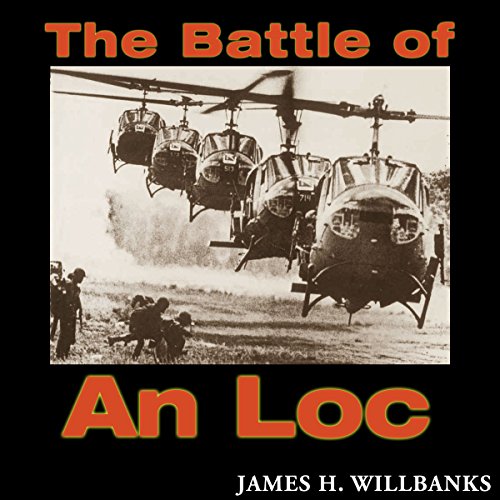 The Battle of An Loc

By: James H. Willbanks
Narrated by: Charles Craig
Try for $0.00

With the knowledge born of firsthand experience, James H. Willbanks tells the story of the 60-day siege of An Loc. In 1972, late in the Vietnam War, a small group of South Vietnamese held off three North Vietnamese divisions and helped prevent a direct attack on Saigon. The battle can be considered one of the major events during the gradual American exit from Vietnam.

An advisor to the South Vietnamese during the battle, Willbanks places the battle in the context of the shifting role of the American forces and a policy decision to shift more of the burden of fighting the war onto the Vietnamese troops. He presents an overview of the 1972 North Vietnamese Easter Offensive, a plan to press forward the attack on US and ARVN positions throughout the country, including Binh Long province and Saigon. The North Vietnamese hoped to strike a decisive blow at a time when most American troops were being withdrawn. The heart of Willbanks's account concentrates on the fighting in Binh Long province, Saigon, and the siege of An Loc. It concludes with a discussion of the Paris peace talks, the significance of the fighting at An Loc, and the eventual fall of South Vietnam.

"A fine book with rich, vibrant descriptions of combat, weapons, and command decisions. Willbanks writes from an insider's perspective ..." ( H-Net Reviews)
"An informative and consuming account. A must-read for those who think the Vietnam War was only about defeating a jungle insurgency." ( HistoryNet)

What listeners say about The Battle of An Loc

An Loc - A Study in a Successful Advisors

Here is my bias: I believe the loss of the Vietnam was due to the loss of information and diplomatic campaigns in Vietnam, the US, and the world. We believed the hype and gave up; Congress de-funded the war in 1973 after this 1972 victory. Thus, reading this book about the 1972 offensive, where the US forces are drawn-down and there is only the advisors with medical, logistical, aviation, and fire support in South Vietnam units, and the North still lost to a semi-competent South is affirmation of this assessment. It was proved in Tet and proved again in this 1973 Easter Offensive. Some declare Iraq another lost war. History, rhyming again Iraq, after Vietnam. Yet, again, the same model was successful in Iraq that allowed the withdraw ... until the sectarian PM of Iraq, had us pull out. The advisor model with enablers to a host nation force works ... if you give it a try and treat it as a generational commitment.