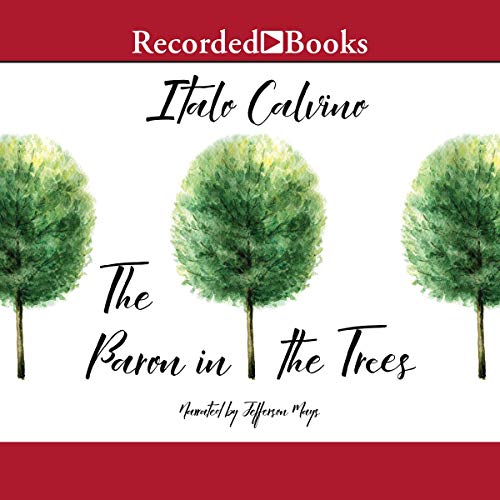 The Baron in the Trees

A landmark new translation of a Calvino classic, a whimsical, spirited novel that imagines a life lived entirely on its own terms.

Cosimo di Rondo, a young Italian nobleman of the 18th century, rebels against his parents by climbing into the trees and remaining there for the rest of his life. He adapts efficiently to an existence in the forest canopy - he hunts, sows crops, plays games with earthbound friends, fights forest fires, solves engineering problems, and even manages to have love affairs. From his perch in the trees, Cosimo sees the Age of Enlightenment pass by and a new century dawn.

The Baron in the Trees exemplifies Calvino's peerless ability to weave tales that sparkle with enchantment. This new English rendering by acclaimed translator Ann Goldstein breathes new life into one of Calvino's most beloved works.

What listeners say about The Baron in the Trees

Engaging. Heartwrenching. Beautiful. I just finished it and... I am speechless. The story is magnificent and the narration keeps up the match of voice and pace en par with the story.

Gentle Fantasy of an Ambitious Kind

When I think of “fantasy,” my first impulse – and most people’s – is to think of something in the Tolkien vein, something in the “high fantasy,” “world building” of Game of Thrones style 1000+pagers. Then, I work to remind to myself, there’s the gentler coming-of-age, quest stuff of Harry Potter of The Wizard of Oz. And that expanded definition can help to rethink the best of what’s possible, giving us peculiar hybrids like Jonathan Strange and Mr. Norrell or The Night Circus (easily the two best ‘fantasies’ I know of from the last 10-15 years).

But there’s a third aspect I sometimes forget to include, too. It starts with Gulliver’s Travels, but it carries through in the 20th Century to Borges and the magical realists. That is, it’s fantasy that has a particular, pointed perspective – fantasy that’s not at all about escapism but rather understands itself as commenting on the world around it through the veil of alternate reality.

After Borges, the most important mid-century writer in that vein is probably Calvino, at least by reputation. I love If On a Winter’s Night a Traveler as one of the great works interrogating the nature of reading and the power of imagination. I’ve put off reading The Baron in the Trees for no good reason, though I think I’ve picked it up a couple times along the way.

This is not If On a Winter’s Night level brilliance. Instead, it’s a gentler, less confrontational fantasy about – as the title says – a young baron who decides, at age 12, that he will never set foot on the ground again. For much of this, we see a character having Italian-inflected Huck Finn type adventures. He invents all sorts of things to make life in the trees easier. He battles pirates and, later, participates in the Napoleonic wars. He befriends a frightening bandit who, given the chance, prefers reading to rampaging. He even has a rich and complicated love affair.

It’s all charming and clever, and Calvino is deft enough throughout that the conceit never loses steam. There’s always a new riddle to solve or challenge to confront, and our narrative perspective – from the Baron’s younger, on-the-ground brother – helps sustain the wonder of it all.

There are hints throughout, though, and an almost explicit discussion at the end, that this is also a serious intellectual interrogation. It’s no coincidence this is set at the height of the French Enlightenment. Cosimo is friends – from a distance – with Montesquieu and Diderot, and he is taken with Voltaire and others. This is an age of philosophical ambition, an age of people who – perhaps naively – refused to stand on the bedrock they inherited and, instead, tried to ascend to something greater.

We know the excesses of the French Revolution. If nothing else, we see them here where, devoted philosophe that he is, Cosimo can’t quite bring himself to acknowledge how Napoleon has betrayed the principles that motivated the Revolution.

As the novel wraps up, though, it invites us to see Cosimo as a man who made an early and rash decision to explore life from a different perspective. There’s a sweet, fantastic quality to that – and it makes the book a pleasure to read – but there’s also a call to reflect on the price and limits of challenging inherited ideas. And that makes it a pleasure to reflect on once it’s finished.

This book had an interesting and different sort of storyline, but it wasn’t quite executed well enough to keep my mind from wandering.

I listened at a higher audio speed which helped. The narrator was above average, I felt.

This is a very creative tale. The narration is excellent. At times, however, I found the story a bit tedious.Although the book has been translated from Italian well, the French is not translated to English. That doesn’t ruin the story, but leaves the non-French-speaking reader in the dark at times.

I have enjoyed this unusual and engaging story. Recommended for a relaxing and imaginative read.

I found this book absolutely entertaining. Calvino has an extraordinary imagination. And the writing evokes amazing imagery. The narrator was excellent as well, enhancing Calvino’s words with a nuanced voice. Listening to “The Baron in the Trees” provided me with many happy hours of delight.

I wanted to like this book more because of its originality but it was a struggle to complete. I’m not sure if it was the story itself or the narration but it seemed to lack that magnetism that some books just exude.

This was a really enjoyable book to listen to. The performance was very good and the story was light and fun. This is not a deep, intense, complicated story, but it is original. I found it to be a pleasant book to listen to.

What a fantastic story

Beautifully written story, with laughs and wonder. I felt transported. I recommend you listen or read. lots of French + Spanish.

. Very disappointed in the story.

Lacked imagination. same boring thing nothing really changed. in the end I was very disappointed.