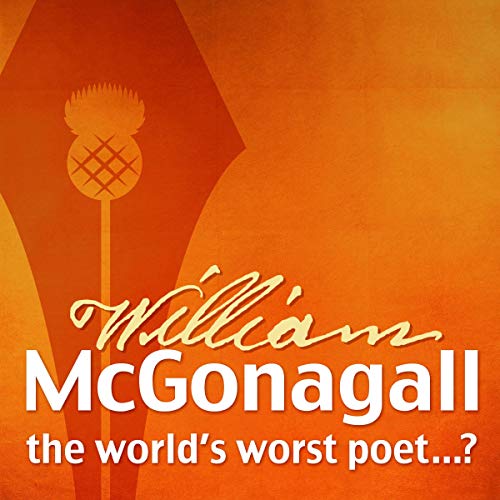 The Autobiography of William McGonagall

By: William Topaz McGonagall
Narrated by: David Rintoul
Try for $0.00

William Topaz McGonagall is widely renowned as one of the world's worst-ever published poets. Yet his discordant muse is hugely popular all over the world - no less a figure than Spike Milligan was obsessed with him. But how do we account for this morbid fascination with verse of little or no discernible merit whatsoever?

William McGonagall didn't discover he was a poet until the comparatively advanced age of 52, when he underwent something of an epiphany - the details of which you can hear in all their glory in this unintentionally hilarious and self-celebratory autobiography. Until then, he was a humble handloom weaver, eking out a living in Dundee, Scotland. But once the muse descended, there was no stopping him - he wrote over 200 poems, many celebrating places he had visited on his travels, many commemorating disasters.

McGonagall had a strange relationship with misfortune - not just his own, but that experienced by others - most notably the 90 souls who died when the "Beautiful Railway Bridge of the Silv'ry Tay" collapsed in 1879 plunging the train and its passengers into the icy waters below. He was particularly obsessed with shipwrecks, composing over 20 poems on various maritime disasters. But he also branched out into conflagrations, floods and military defeats, making him an unparalleled chronicler of catastrophe.

What you'll hear is not so much an autobiography, as a series of episodes in an otherwise dull and uneventful life punctuated with examples of his unparalleled verse: there's his trip to Balmoral to visit Queen Victoria - she wasn't in; an interlude in London, when a hoaxer placed an irresistible business proposition before him; sailing to New York, only to discover he could not perform there, before sailing all the way back again. And much more. So relentless was his chutzpah and self-belief, it's by turns touching, yet somehow breath-taking in its arrogance. Couldn't he tell he had no poetic talent whatsoever?

This puzzle has prompted some commentators to brand McGonagall a hoax. But if the McGonagall persona is nothing but an elaborate confection, the comic genius who dreamed him up has yet to admit responsibility. And, as David Rintoul, the performer of this superb audio remarked during recording - no one appeared to have gained from the deception - least of all McGonagall himself. His frequent shortage of a shiny sixpence prompted the Monty Python team to create a similarly financially-challenged Scottish poet, one "Ewen McTeagle", whose final poem before he committed suicide was entitled "What's twenty poonds to the bloody Midland Bank?" Yet McGonagall is immortal. His verse, in all its arrhythmic, clichéd awfulness, will survive us all, and is, in the poet's own words, "wonderful to behold". And now, of course, hear!

What listeners say about The Autobiography of William McGonagall