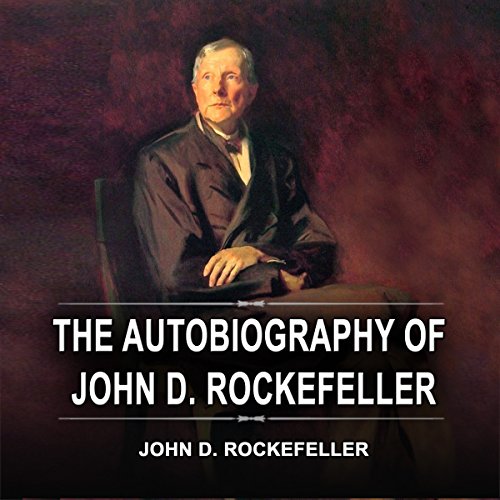 The Autobiography of John D. Rockefeller

By: John D. Rockefeller
Narrated by: Kevin Theis
Try for $0.00

John Davison Rockefeller was an American oil industry business magnate, industrialist, and philanthropist. He is widely considered the wealthiest American of all time and the richest person in modern history.

Rockefeller was born into a large family in upstate New York and was shaped by his con man father and religious mother. His family moved several times before eventually settling in Cleveland, Ohio. Rockefeller became an assistant bookkeeper at the age of 16 and went into a business partnership with Maurice B. Clark and his brothers at 20.

After buying them out, he and his brother William founded Rockefeller & Andrews with Samuel Andrews. Instead of drilling for oil, they concentrated on oil refining. In 1867, Henry Flagler entered the partnership. The Rockefeller, Andrews & Flagler company grew by taking-over local refineries.

Rockefeller formally founded his most famous company, the Standard Oil Company, Inc., in 1870 as an Ohio partnership with William, Flagler, Andrews, Jabez A. Bostwick, and a silent partner, Stephen V. Harkness. He ran it until 1897. As kerosene and gasoline grew in importance, Rockefeller's wealth soared, and he became the richest person in the country, controlling 90 percent of all oil in the United States at his peak. Oil was used throughout the country as a light source, until the introduction of electricity, and as a fuel after the invention of the automobile. Furthermore, Rockefeller gained enormous influence over the railroad industry, which transported his oil around the country. Standard Oil was the first great business trust in the United States. Rockefeller revolutionized the petroleum industry, and along with other key contemporary industrialists such as steel magnate Andrew Carnegie, defined the structure of modern philanthropy.

This autobiography details John D. Rockefeller and his rise to success and is narrated remarkably by Kevin Theis.

What listeners say about The Autobiography of John D. Rockefeller

THIS IS NOT JDR BIOGRAPHY!! FAKE TITLE

THE TITLE IS WRONG!!!! The content actually is RANDOM REMINISCENCES OF MEN AND EVENTS. Dishonest publisher change the title for his advantage is making a sell based on a FAKE TITLE!

Rockefeller was right. This is not a bio..just a list of tales about a business ventures and acquaintances.

too slow was looking forward to this