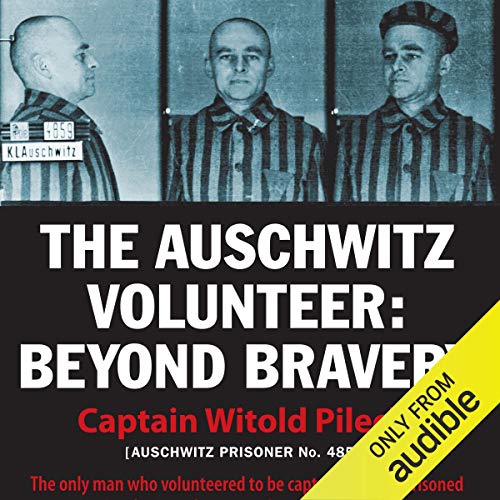 In 1940, the Polish Underground wanted to know what was happening inside the recently opened Auschwitz concentration camp. Polish army officer Witold Pilecki volunteered to be arrested by the Germans and report from inside the camp. His intelligence reports, smuggled out in 1941, were among the first eyewitness accounts of Auschwitz atrocities: the extermination of Soviet POWs, its function as a camp for Polish political prisoners, and the "final solution" for Jews. Pilecki received brutal treatment until he escaped in April 1943; soon after, he wrote a brief report. This book is the first English translation of a 1945 expanded version. In the foreword, Poland's chief rabbi states, "If heeded, Pilecki's early warnings might have changed the course of history." Pilecki's story was suppressed for half a century after his 1948 arrest by the Polish Communist regime as a "Western spy". He was executed and expunged from Polish history. Pilecki writes in staccato style but also interjects his observations on humankind's lack of progress: "We have strayed, my friends, we have strayed dreadfully.... We are a whole level of hell worse than animals!"

What listeners say about The Auschwitz Volunteer

The bar of manhood

When I first began this book I was some what disappointed. The reader at times can be hard to understand. The book is all so written as an account in some ones life and therefore has had little effort put in to creating a gripping story line. However getting further in to the book I realised what this book really is, a story of one of the bravest and best of the species called human beings. Durring a time when any normal person would have done anything possable not to go and anything else to leave Mr. Pilecki volunteered to go and choose to stay, in order to complete his work. He is the bar in which any man should strive to reach. I feel as I shall try harder to be a stronger better human,man, after listening to this book. I recommened this book highly for a few different reasons but mainly because it has changed my perspective.

Worth every minute for a glimpse of Auschwitz

Provides a captivating first hand account of time a prisoners life and trials in a concentration camp...all while organizing and eventually escaping the horrible conditions. Only to be murdered after the war was over.

It’s a MUST read

I’ve just finished listening and I’m lost for words. It’s a must read. The bravery of Witold Pilecki and his comrades is hard to fathom. It’s not only a very detailed account of what happened in Auschwitz, but also a good reminder for us what true bravery and sacrifice means. Finally, the narration is very compelling and makes you feel like you are listening to Pilecki himself.

The story is absolutely fascinating, my only complaint is that because his situation this is basically what amounts to a rough draft. I would love to see someone else come in and gather all the information from this book and put it in a more clear and interesting fashion

Captain Witold Pilecki is a man of honor!!

I wish everybody would read or listen to this book. What Witold Pilecki has done for his country is unimaginable and he will be honored for this for eternity. History books about WWII focus more on the holocaust and barely anything is mentioned to what has happened to millions of poles. Anybody who wants to hear a true patriot, a pure from heart and soul patriot should listen to this book.

I thought this book was great. I would recommend to anyone interested in that era. be warned not the audiobook to listen to if you are going out to a party. I found this book to be really humbling.

A first person view of hell & 1 who survived it

The deeper I went into the book, the more I wondered how anyone could survive such hell, and who besides one with great courage and strength would ever volunteer for such a mission.

I wondered why I had never heard of Witold Pilecki and what he did. Now I can never forget.

As a Polish born immigrant, I find this an extremely powerful and profound experience.

The reading by a Polish person with an accent in English makes this more authentic. Their intonation during some painful moments shows the shared suffering of the Polish people and the depth of their soul.

I am surprised this is written so well, even with some diary like phrasing or repetition, it is an understatement to say this was written under duress.

Bless Poland and our people. Bless all peoples who suffer and live with the consequences and leftovers of great past and present suffering.

Some very insightful lessons! Especially in today's current divisive climate- it gives one pause- are we doing it again?

I'm not sure I can call this book good. It's well written but has a terrible content. Perhaps we should all listen to it. I've read a lot of ww2 books but this really made me stop and think, about how fortunate we are compared to these poor people.

Depressing, enlightening and educational, this is perhaps the most thorough first hand account of the treatment suffered by so very many in Auschwitz.

It's hard to put into word how amazing, horrifying, enlightening, and at times uplifting this entire book is. It gives an genuine and daily insight into the evolution and growth of a place of mechanical death. On top of that, it gives a small, and personal insight into how people coped with day to day problems.

There isn't a human on the planet who shouldn't read this book.

horror report from the real hero

The short report from the real hero. I loved it. it helps you to re value what is important in life.

The speaker could be a native English, it would help a lot.

This book I found a little boring as the same sentences were repeated often. The numbers used to describe people was quite tiresome. I story never really got going and there was no action.
The narrator had a very monotone voice which got on my nerves in the end so I didn’t finish the book.

Heartbreaking, dark, and at times relentlessly brutal, this is perhaps the greatest example of bravery and courage I've ever encountered.

This is an unimaginable tale of resilience.

How did this man survive such brutality and murder all around him? I'm not sure, but this account was truly compelling. Depravity and gruesome violence abounds in almost every chapter; it's definitely a hard listen at times, but to think the man survived this travesty of a camp, and for so long, is an incredible feat that must be witnessed with this book.