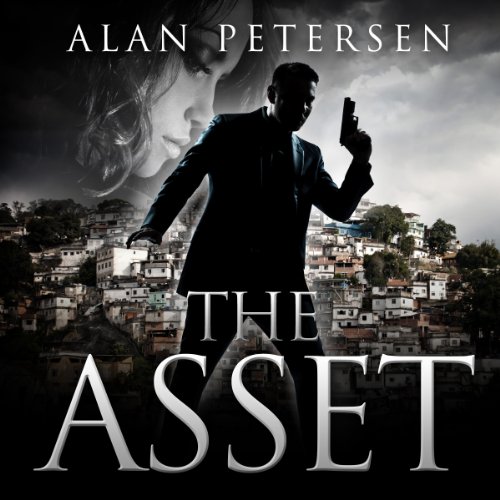 By: Alan Petersen
Narrated by: Steven Cooper
Try for $0.00

This fast-paced spy thriller tells the story of CIA agent, Pete Maddox, who discovers a Libyan terrorist training camp in the Amazon jungles of Venezuela making him and the woman he loves targets of the brutal head of the secret police.

The Asset is a high octane, edge-of-your-seat CIA thriller described "explosive and breathtakingly exciting", a "great suspense[ful], and "fast and furious." The story is an action packed international thriller with real life political tensions between Hugo Chavez's Venezuela and the United States simmering in the background.

What listeners say about The Asset

Bogged down in background and detail

The author, Petersen, has clearly done his homework on the 2002 coup d'etat attempt in Venezuela, the CIA and general information about the area at the time. Unfortunately he wants you to know he has done his homework by cramming every single little detail of information into his narrative, to the point in which is slows to a sluggish pace. This book did not feel like it was an 8.5 hour book. It felt much, much longer.

Similarly he has built in depth profiles for every single one of his character and includes every single bit of that information at their introduction. when a character is introduced (even some minor ones who appear for a chapter or two) we get an in-depth discussion on who they are and what they have been doing for the last 10 years to get them to this point in the CIA/government/real estate. Do I need to know that the main lady's grandparents moved here and did x,y and z or that she is currently using a part of her house as an office (especially when the next time it is discussed business is booming and she has a new office)? No, not at all. But it is there, slowing the story down.Or not slowing it down, because it moves in time very quickly, but rather taking the place of actual character interactions.

One thing I hear a million times about books and movies is "show, don't tell". But this book is mostly telling and not showing. The main character, Maddox, meets someone and rather than having the dialogue we are told about it in a basic overview of the conversation. We are told of a girl he meets and falls for. After 2 years of fighting the attraction they finally get together. But are we shown any of this 2 years? no. we get maybe 3 lines of dialogue from them directly. we are given a description of her - smart, funny etc - but non of these characteristics are ever actually shown.

It gets better a bit later, but by then the damage is done. And even late in the book Petersen still slips in and out of the style and the "too much info" problem, which slows the book when it should be hitting its climax.

The narration by Cooper is also fairly flat. Some (not all) characters are givens distinctive voices, but for many there is no distinction from the narration. And then there is no variation within that narration. It is clinically dry, not engaging in any of the possible wit, or emotion, of events. It gives the same space and emphasis to every word. Even is normal speech this is not the case, with people spending less time on unimportant words. Cooper doesn't do this, he keeps a constant pace for all words meaning that nothing is make clear to be important or emphasized.