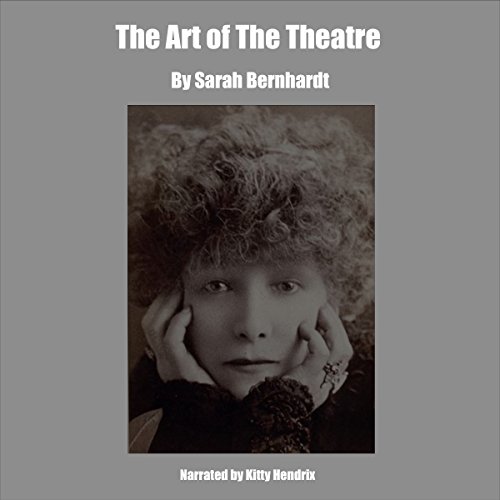 By: Sarah Bernhardt
Narrated by: Kitty Hendrix
Try for $0.00

" I have not written this book to attract young people to the dramatic art but to give them friendly advice and guide them by my experience." Thus begins a master class taught by Sarah Bernhardt, arguably the greatest actress ever to grace a stage.

Timeless and surprisingly current, The Art of the Theatre, published after her death at age 78, is the final and most in-depth record of the great actress' views on acting and the theatre. Here "The Divine Sarah" shares advice on everything from speech, movement, role preparation, vocal warmups, and make-up tips to why she preferred to play Hamlet instead of Ophelia. Filled with lively stories and gleeful gossip, The Art of the Theatre shows the intuitive and often humorous observations that were Sarah Bernhardt. She describes her successes, her failures, and the times she lived in with unflinching honesty and an approach to the arts that leaves no doubt as to why she is still considered today to be one of the greatest artists ever to have lived. Out of print and unavailable for decades, this rare book is only available in this audio format.

What listeners say about The Art of the Theatre

THE ART OF THE THEATRE was a poetic and dramatic narrative of Sarah Bernhardt. She was Chardonnay, a rite of passage, enigmatic, and while being a small woman, an icon of large magnitude. She was a complex woman who embodied art, especially the dramatic art. The theatre. I think she was a woman who carved her place within a man's world. She was sharp, smart, and minced no words. She told it like it was, the good and bad, the truth. When asked why she would rather play Hamlet than Ophelia she countered with the fact that she liked playing male roles for their intelligence. When describing why she preferred playing the role of Hamlet rather than that of Ophila, she stated that his was the most original yet the most simple. He seemed complex but had only one idea which was to avenge his father. She may well have described herself with those very words.

The advice she shares on acting such as stage presence, appearance, tone of voice, pronunciation, enunciation, and physical attributes is honest and timeless. When she discusses the will or willpower, I think she really nails it. "Willpower is the fundamental condition of success." An actor must abandon the whole 'self' and give the character a soul including heart, mind, and body. "A true actor realizes himself through passion and can't be natural unless he has the power to project himself."

I feel that Sarah Bernhardt is timeless and highly revered as an exquisite woman of the arts and taste. She's the saint of all things dramatic. Saint Sarah. I don't know how saintly she was but what I do know is that she knew her craft backwards, forwards and in between. While she was the most famous actress she was also the most beloved as can be shown by large crowds waiting to see her and waiting for her after a performance. I didn't know she'd had a bit of stage fright. This was an insightful narrative/bio of Sarah Bernhardt's notes and musings about what it takes to be an actor. This is a woman I would love to go back in time and meet. This is a fabulous audiobook that I would definitely recommend. It's a matter of style and taste but I loved it and Kitty Hendrix's performance made it all the more wonderful.

KITTY HENDRIX is the embodiment of Sarah in this story. Kitty reading Sarah is perfection. She took it to a whole other level of amazing while channeling Sarah herself. Kitty grasped everything this audiobook was about and projected it out into the world just as Sarah would have. This was a dramatic as well as impressive piece of work. She has a rich, even tone that adds sophistication to her work, making her a real stand out as a voice actor.

Audiobook received in exchange for an unbiased review

It was time well spent. Some of Ms. Bernhardt's stories were fascinating. But I think I already knew too much about her to full appreciate the audio book.

This isn't a book with a climactic ending. I already knew how Sarah's life climaxed.

Every scene in which she displayed her brilliant talent and eccentricity. Sorry, no one scene stands out.

What else would you have wanted to know about Sarah Bernhardt’s life?

I'd like to know how she, how so many actresses, managed to remember so many lines in so many roles and could one be a great actress without such a memory. I would also like to know if she was aware that she would be regarded as the greatest actress of her time.

Yes, while I was not totally enraptured with the book, having read so much about Sarah, I was wildly impressed with the narrator. Obviously she brought her own considerable acting abilities to making the book even more compelling. She had a wonderful rich voice and great delivery. I might not have finished the book if not for the splendid narration.

A beautifully done narration of a rich book.

I can not say enough about this audio book.
Not only does the narrator deftly handle the theatricality of the language,....she allows us to become a living part of the amazing force of nature that was Sarah Bernhardt. Hendrix draws us in and holds us tight right until the end. Thank you, Audible.

I had no idea that she was a Frenchwoman

Many thanks to the translator, or those of us who do not speak/read French would have been denied this experience. Renowned in her own time and still admired today, Mme Bernhardt intended this volume as added instruction to those who would act upon the stage. There is personal history related throughout, but the principles and cautions promoted remain thoroughly relevant to performers in any venue and time. Advice as to precepts of what we know as 'method acting', and involved memorization, as well as choosing roles in which one may shine rather than plod are no respecters of era or venue. This should be a valued read for high school or college level performers hoping for professional roles.
Further thanks to Ms Hendrix for her facility with French pronunciations. One has reason to believe that she absorbed and utilized the knowledge gained here to give an excellent audio performance which further enhanced the information therein.
This audiobook was provided by the author, narrator, or publisher at no cost in exchange for an unbiased review courtesy of AudiobookBlast

Style, class, and a bit of 19th century attitude

Everything about her performance channeled Ms. Sarah Bernhardt as I would picture her. Although I didn't know much about the famous actress before listening, I felt that based on her statements, Ms. Hendrix spoke the way Ms. Bernhardt would have– with authority and class.

It's great to see this classic text in audio, and delivered by such a worthy professional. I hope to hear more from narrator Kitty Hendrix!

As this book makes clear, Bernhardt had the highest of standards when it came to the art of acting. With this in mind, I think it is safe to say she'd be more than pleased with this audio edition rendered, as it is, so expertly by the very talented Kitty Hendrix. Excellent overall and highly recommended.

Kitty Hendrix' voice transforms Sarah into a vibrant person. Kitty doesn't limit herself to a mere narration, but breathes life into this story. Her voice has attitude, confidence and strength.

A window into a unique mind

I received this audiobook at no cost from the Audiobook Blast in exchange for an unbiased review.

Bernhardt was a unique individual. She was both a product of her time and an author of change. Anyone listening to this book should keep in mind the different world she lived in, and how such a world necessarily affected a different worldview. Her comments on actors' bodies seem uncharacteristic and overly dismissive next to her profound insights into artistry and artists. I enjoyed this book, though I had a very hard time separating the author from the subject matter.

Hendrix's narration fitted said author excellently. She did well with portraying Bernhardt's experiences and attitudes without coming off as overtly apologetic. I recommend this audiobook to anyone interested in the changing experiences of artists, particularly female artists, in the history of theater, and the development of a modern world stage.

The Art of the Thaetre

This was a very good behind the scenes look at what goes on and what this actress ,in particular, felt while working in theatre.I enjoyed it a lot having worked behind the scenes at a theatre locally.Ms Bernhardt shares her views on many issues and what is expected in theatre life.
Kitty Hendrix does a wonderful job narrating this fascinating read!
"This audiobook was provided by the author, narrator, or publisher at no cost in exchange for an unbiased review courtesy of Audiobook Blast."

This book gives us a rare glimpse into the mind of a Victorian era icon, someone we know as emblematic of her profession but as little else. I found it enlightening to get a sense of her life and times, especially her impressions of America.

Would you recommend The Art of the Theatre to your friends? Why or why not?

I'd be more inclined to recommend it to actors than to general readers. And even at that more for the historical perspective it offers. I'm sure that Bernhardt's tips on stage makeup must be rendered obsolete by advancements, and of course she has nothing to say in the areas of television or film acting (still in its early years at the time of her death). On the other hand, actors can benefit from her observations on breathing, diction, etc.

The book is entirely in Bernhardt's voice. When others are quoted, those words are delivered as though Bernhardt is impersonating the speaker. That can be more difficult to pull off than creating another character entirely, and Kitty Hendrix does it with seeming ease. As Bernhardt herself, Hendrix deftly delivers the famed actress' unapologetic confidence in her own gifts without seeming haughty. Hendrix' diction and tone come across as aristocratic but not studied, a nice balance indeed.

Did The Art of the Theatre inspire you to do anything?

I will probably review her notes on voice from time to time as my voiceover/narrator work continues.

I'm going to keep an ear out for Kitty Hendrix. I'm curious to hear her tackle works of fiction.