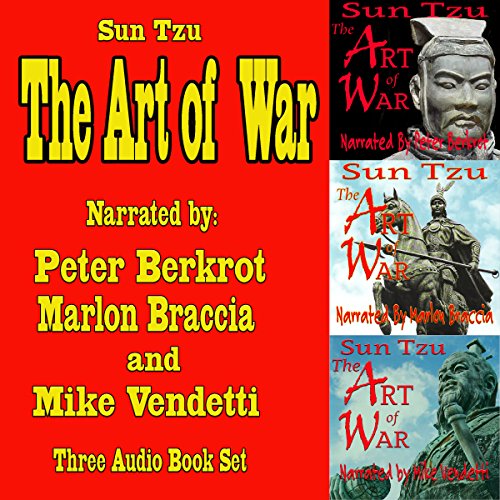 The wisdom of Sun Tzu, narrated by Peter Berkrot, Marlon Braccia, and Mike Vendetti. Thought to have been written over 3m000 years ago, this missive has been included as a course of study by the US Marine Corps and military academies. These precepts have destroyed nations and built business empires. An executive, a general, a congressman, a businessperson - or anybody just wanting to get ahead - should listen to this at least once a month. This is a three-audiobook set, with each version the complete audiobook but with a separate narrator. Since The Art of War has become a motivational and self-help text, multiple listenings are encouraged. The listener can choose to listen to Peter Berkrot's tenor, the lovely female voice of Marlon Bracciaa, or Mike Vendetti's soothing baritone.

What listeners say about The Art of War: Three Complete Audiobook Set

Only need to listen to 1 chapter.

The text was good but I was expecting a total of 3 hours of good content. Instead the other two hours was just two different people reading the same text.