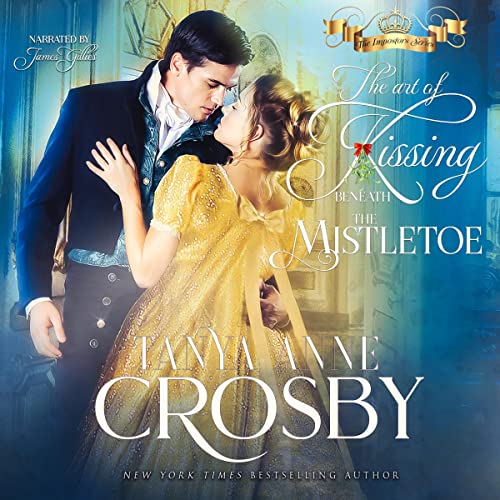 The Art of Kissing Beneath the Mistletoe

By: Tanya Anne Crosby
Narrated by: James Gillies
Try for $0.00

Once upon a time, Alexandra Grace Huntington believed in fairy tales. She oohed and aahed over gowns from Courtauld’s, never wore black unless in mourning, always minded her social graces, and never, ever indulged her inner bluestocking. Now her world has come crashing down like a thousand shards of glass. Her father is a dastard, her mother blames her for taking his side. (Rightly so, considering everything Lexie has learned.) She’s home alone for the holidays, all alone, no siblings, no friends, and not a shred of pride remaining. But that’s all well and good, so far as Alexandra is concerned, because everything she thought she knew was wrong. Her best friend had it right all along, and the Universe had seen fit to reward Claire with, of all things, a crown (quite literally). However, while Lexie once aspired to the same, she has changed. When she’s unexpectedly invited to celebrate one last holiday with her best friend, she can’t accept quickly enough...only how did one comport oneself after everything that was said and done?

Benjamin W. Wentworth III, the seventh Earl of Highbury, has been through his own travails. He nearly drove his family to ruin, and now, after spending weeks in debtor’s prison because of Alexandra Huntington's father, and coming shockingly close to losing his life and endangering his sister, he realizes that all that glitters is simply not gold. The last thing he desires is to saddle himself with a woman like Alexandra, with whom he once shared a passion for the Season. Now, he’d rather choke himself with a silk cravat than endure an instant with someone so vain, so self-indulgent, so giddy and witless. He only wishes his sister would leave off with the holiday matchmaking - mustn't she realize how much he has changed?  When Lexie arrives to celebrate one final Christmas before his sister leaves for Meridian, it is all Ben can do to avoid the empty-headed chit. Unfortunately, his sister and her friends have festooned the entire house with mistletoe, and to make matters worse, Lexie is proving to be someone else entirely, and he’s about to reaquaint himself with the art of kissing beneath the mistletoe.

"If her [Tanya Anne Crosby's] intentions were to write her loyal fans a hug...mission accomplished." (Whiskey & Wit Book Reviews)

What listeners say about The Art of Kissing Beneath the Mistletoe