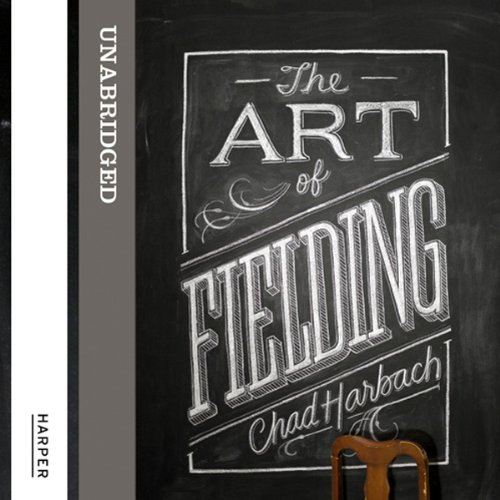 The Art of Fielding

By: Chad Harbach
Narrated by: Holter Graham
Try for $0.00

A wonderful, warm novel from a major new American voice. In The Art of Fielding, we see young men who know that their four years on the baseball diamond at Westish College are all that remain of their sporting careers. Only their preternaturally gifted fielder, Henry Skrimshander, seems to have the chance to keep his dream – and theirs, vicariously – alive, until a routine throw goes disastrously off course, and the fates of five people are upended.

After his throw threatens to ruin his roommate Owen’s future, Henry’s fight against self-doubt threatens to ruin his; while Mike Schwartz, the team captain and Henry’s best friend, realizes he has guided Henry’s career at the expense of his own. Keeping a keen eye on them all, college president Guert Affenlight, a long time bachelor, falls unexpectedly and dangerously in love, much to the surprise of his daughter, Pella, who has returned to Westish after escaping an ill-fated marriage, determined to start a new life.

Written with boundless intelligence and filled with the tenderness of youth, The Art of Fielding is an expansive, warm-hearted novel about ambition and its limits, about family and friendship and love, and about commitment – to oneself and to others.

"Reading The Art of Fielding is like watching a hugely gifted young shortstop: you keep waiting for the errors, but there are no errors. First novels this complete and consuming come along very, very seldom." (Jonathan Franzen)
"Chad Harbach’s The Art of Fielding is one of those rare novels – like Michael Chabon’s Mysteries of Pittsburgh or John Irving’s The World According to Garp – that seems to appear out of nowhere, and then dazzles and bewitches and inspires, until you nearly lose your breath from the enjoyment and satisfaction, as well as the unexpected news-blast that the novel is very much alive and well." (James Patterson)
"I gave myself over completely and scarcely paused for meals. Like all successful works of literature The Art of Fielding is an autonomous universe, much like the one we inhabit although somehow more vivid." (Jay McInerney)

What listeners say about The Art of Fielding

Even if I wasn't a baseball fan, I would have loved this book. It's about talent, ambition, consequences, confidence, friendship, arrogance, doubt, and so much more.

Not just for baseball fans!

As a Brit with no knowledge of Baseball I was a little sceptical about this book but having read some great reviews in the UK press I wanted to give it a try. I am a great fan of American Literature and I find that having a great narrator really makes or breaks a book for me, in this book Holter Graham is spot on for me.

I love the way Harbach is able to wind his way around life drawing us into the characters and through this thread in the baseball elements and make is so very readable/listenable. It reminds me a lot of John Irving (of whom I am big fan) and that is a great plus.

I liked the suspense Harbach uses in some key moments and didn't myself find this too contrived - don't want to add any spoilers so you'll have to listen to the book to find out how the plot unravels and the story ends.

I loved some of the names of the characters too - Henry Scrimshander, Guert Affenlight, Chef Spirodocus, Pella etc, very inventive.

All in all, a great read which I thoroughly enjoyed!

Entertaining novel about college and baseball

If you could sum up The Art of Fielding in three words, what would they be?

What does Holter Graham bring to the story that you wouldn’t experience if you just read the book?

Yes - but that would spoil it for readers.

This is a very good novel. The characters are interesting, and the interjecting trajectories of their lives becomes fascinating. Baseball is a metaphor and backdrop for the developing drama. Throughly enjoyed listening to this.

Get this its a great listen

This book will be a classic a great listen a book you will go back to time and time again.

I really enjoyed this book even though I knew nothing about baseball and wasn't interested in it. It is a story of what can happen when one realises personal greatness but how inexperience and naivety can impede its progression. The characters are very real and the human stories both tragic and believable. There are many people's individual lives here which all implicate on each other. I was really surprised by how much I enjoyed it and I would recommend trying it.

I enjoyed this. As the title suggests it was more than just a sports story. Henry is living a quiet life in a farm town, when Mike recruits him to his college. For a small town farm boy college is a real eye opener, his room-mate is gay, he is socially inept and until the football season finishes, he is left on his own awaiting his one friend Mike, to take him under his wing.

I really enjoyed this book It was gripping sad and fascinating. Well worth a read

sad and yet slightly life affirming as well

loved every second of this. characters that are so complex and rich that they somehow seem tangible

More than a ball game

Life is more than baseball.
But - even for a non-expert - the game provides a satisfying theme for this beautiful book.
Home run!

Amazing narration and incredible book. Transfixed from start to finish. Every character so vivid and memorable.

Would you listen to The Art of Fielding again? Why?

Yes, yes, yes! (And I did - the moment I finished it the first time round!)

The characters are wonderfully believable, their journeys a joy and their plights heartfelt.

I found myself laughing on the train, and, at other times, in bits. So very enjoyable.

You will want to emigrate to watch baseball

Would you consider the audio edition of The Art of Fielding to be better than the print version?

I have not read the print version, but the audio brings it to life. I am not young, American or male, so the voice enhanced what I could imagine.

The weaving of the story with the baseball was so skilful. I gave a damn about these young people in a far country.

The consistency of the voices, the changes from male to female, young to older, character to narrator. He did especially well at the descriptions of the ball games.

A random read that turned out very worthwhile!

I chose this based solely on the fact it was Baseball themed, and it turned out to be a very character rich tale that always kept me wanting more and more. Nothing too deep, just a great audiobook.

Take note though, I found the performance of Henry completely off and not how I would imagine his voice - to a point where it affected my enjoyment of the experience. That might just be me though.

Also I haven’t read many Baseball books, though for fans, it’s definitely not the centre of the narrative, just the setting.

What a great story

An intricate weaving of storylines that does not disappoint. Beautifully told with raw honesty and love.