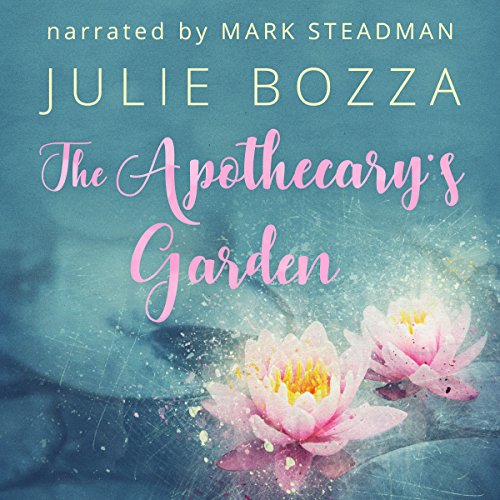 By: Julie Bozza
Narrated by: Mark Steadman
Try for $0.00

Hilary Kent, a Londoner all his working life, retires to Wiltshire after an estranged cousin unexpectedly leaves him an inhabitable tower surrounded by an overgrown physic garden - and that's when graduate student Tom Laurence suddenly erupts into his life, convincing him that together they can restore the ancient garden to its former glory. Tom's cheerful friendship is the best thing that's ever happened to Hilary and he's perfectly content with that until, to his astonishment and confusion, it seems that Tom's affection for him is beginning to grow into something more, something he feels he probably shouldn't allow.

A male-male romance that makes other May-December pairings look like June-October. Set in Wiltshire, England, with two English characters. The older man, Hilary, is the POV character.

What listeners say about The Apothecary's Garden

This is a gentle romance with gardens and history and the countryside. I quite enjoyed it.

Age is just a number

I loved this audiobook. I had listened to ‘A Threefold Cord,’ which was about three young men, actors in their twenties, sorting out what they want to do in their lives and how they are going to manage a very unusual relationship – a polyamorous relationship. I loved that book and was thrilled to get ‘The Apothecary’s Garden’, another audiobook by Julie Bozza.

Now, there is a massive age gap between Tom and Hilary. So, as I listened, I tried to think of couples with an age gap that large. Hugh Hefner came to mind, but I pushed him right back out because, just, ew. My next thought was David Furnish and Elton John and I was surprised it was only 17 years. Catherine Zeta-Jones and Michael Douglas? 25 years. Emmanuel Macron, the new President of France and his former teacher Brigitte? 24 years. Director Sam Taylor-Johnson and her husband, actor Aaron (a couple who hyphenated their name) – 24 years. From my own country, Celine Dion and Rene Angelil? A classic and tragic love story with 26 years between them. Finally, Sarah Paulson and Holland Taylor? 32 years and a beautiful same-sex relationship.

Now, the difference between Tom and Hilary is even greater, but I found it completely believable. Might it bother some readers? Perhaps. Did it with me? No. It just made me love both men even more.

Hilary Kent, who has lived and worked in London his entire life, has inherited a home with a garden in the English countryside. With nothing to keep him in London, he takes up residence on his dead uncle’s estate. Soon, Tom Laurence arrives on his doorstep, wanting to spend time in Hilary’s garden. The man who has never lived with anyone, and has been alone for most of his life, is now granting permission to this attractive and very young man, allowing him to spend time in the magical garden. Hilary has only ever looked out at the garden with consternation – it’s overgrown, disorganized, and something Hil has no experience with. Tom’s enthusiasm, though, is contagious, and soon Hil is learning more and more about something he’d never had any interest in.

Tom’s moving in was never part of the plan, but when the young man’s housing becomes a crisis, Hil reluctantly agrees to let him stay temporarily. Since they are just landlord and lodger, no one in their sphere would suspect they are lovers.

This is a slow burn book. Very slow. The two men get to know each other and discover that living with someone can be comfortable and fun.

I listened to this book a few weeks ago and have been thinking about what I wanted to say about it ever since. I have pages and pages of notes, but none of them matter. I loved this book. Two men falling in love based on more than just physical attraction (although that is there too), is beautiful. This book is very different from many of the m/m books out there. This is about a meeting of minds and souls. That there is an unsolved mystery surrounding the garden and a couple who lived several hundred years ago was just lovely.

As times moves on, Tom discovers some unusual seeds. He says they should be called Tom’s Rare Seeds. Or Hilary’s Precious Seeds. It’s a cute moment.

There are moments of great levity – like when Tom says 42 is the meaning of life and Hil has no idea what he means. I haven’t read ‘The Hitchhiker’s Guide to the Galaxy’, but even I know the reference. By the time Christmas comes around, the gifts they give each other prove just how well they have gotten to know each other.

The outside world, though, is always just beyond the sanctuary of the garden. Hil dreads the day the relationship might become public, is terrified of meeting Tom’s parents, and is convinced Tom should get together with his academic advisor once he graduates. No assurances Tom provides can abate Hil’s feelings of despair.

In the end, the men overcome all Hil’s doubts and don’t worry about what anyone else might think. They have their happily ever after and I was so glad. It gave me a bit of hope that when you remove the emphasis on physical looks and age, two souls really can find each other.

What can I say about Mark Steadman? One of my favourite British narrators? Absolutely. It’s a wonderful performance. I hope he does many more.